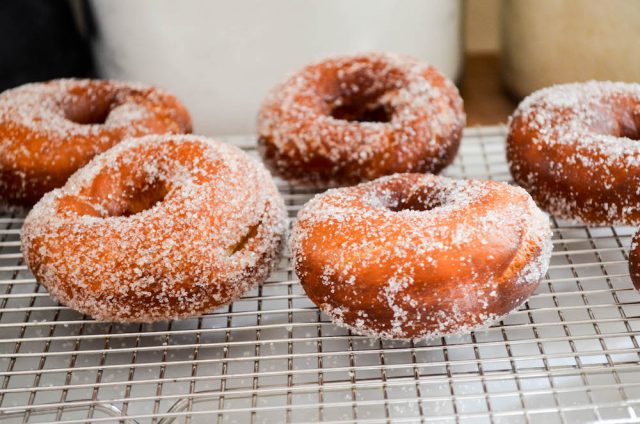 Let’s clear up one thing right away— I know Yom Kippur has passed, but there’s still good reason to talk about these doughnuts. When it comes to making doughnuts, this is perhaps the easiest recipe you’ll encounter. The dough, a simple, vanilla-flavored base, comes together effortlessly, and once risen, the doughnuts are shaped by hand. Not needing to stamp out circles makes for zero waste. While these might look like cake doughnuts, they’re actually raised (yeast-leavened).

For as delicate as the dough feels after mixing and kneading it, though, the resulting doughnuts pack a little heft to them. I wouldn’t say they weigh you down, so much as they satisfy you in a way doughnuts generally don’t—or maybe it’s just because I hadn’t eaten in 22 hours, so the satisfaction came from almost achieving my goal.

The Yom Kippur fast is supposed to be 27 hours, but I started a bit too late on Friday night—the convenience, I suppose, of being Catholic by birth. I’d been seriously considering fasting for the first time to find a deeper connection with the heritage I’m raising my children to understand, but wasn’t sure what to expect. I read about various people’s first fasting experiences, talked with an acquaintance who supported my decision either way, but also kindly shared her own experiences.

By Friday evening, once sundown came, and I knew dinner would get to the table too late, I thought the decision had been made by circumstance. Still, I chose to refrain from eating or drinking anything else that evening. I woke the next morning, and thought to myself, a forgiving higher being would understand this first time transgression, and at that moment I decided I would fast. I wasn’t foolish. I’d eaten a substantial enough meal the night before, but still wasn’t really sure how the day would go, aside from the quiet activities I planned with the girls.

We’ve never gone to temple, but I did tell them in advance that it would be a day free of electronics and devices, focused on family and intention. We played some board games, went for a long walk along the reservoir, and in between, I made the dough for these doughnuts, dictinobis di Kippur, more commonly known as ciambelle di Kippur outside of Pitigliano, the town where Edda Servi Machlin grew up in italy . 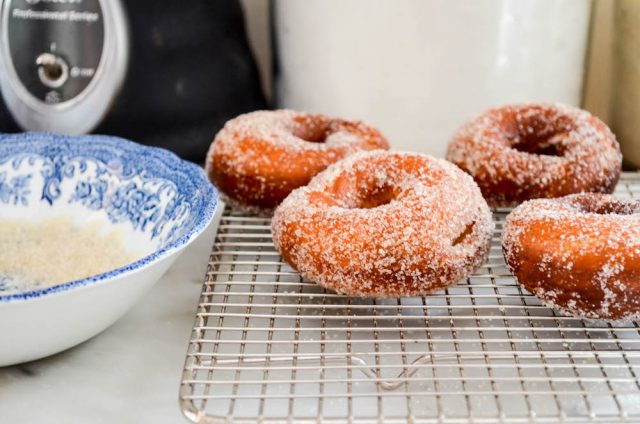 When I came across this recipe in her cookbook, I laughed to myself, imagining Michael saying, “of course you’d find a way to work doughnuts into a Yom Kippur break fast menu.” And that leads me to yet another question I never thought to ask him. Did he ever fast for the High Holiday? It’s not something he ever did while we were together, and yet I wonder if he ever did in the one of the 35 years before we met each other. What about his grandparents? How did they celebrate the High Holidays? I really need to keep a running list of questions for when I see him again one day.

When evening came, and the sun was set, we lit candles at the dinner table. I made a simple frittata, served some freshly baked challah, apples & pears, salad with kale picked from the garden, and these doughnuts. The girls did not fast, in case you’re wondering, and hadn’t even realized I was fasting all day long. I made them lunch, so they were none the wiser. I explained to them at dinner why I did it, and why it mattered to me. And then we told stories, laughed as we always do at dinnertime, and ate doughnuts. And the day was exactly all I hoped it would be, and more. 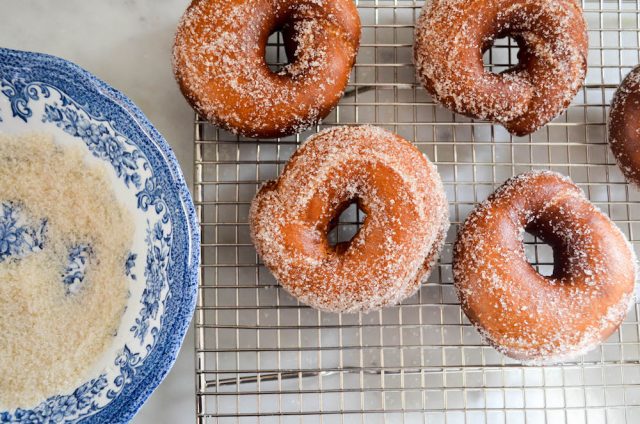 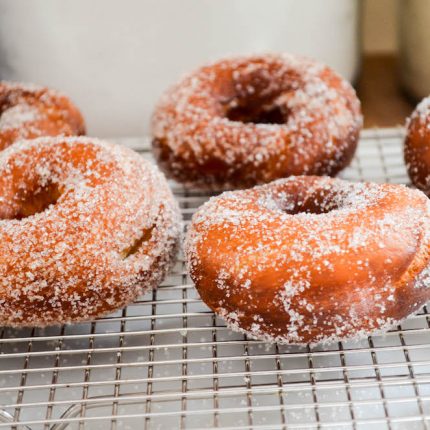 While these doughnuts are traditionally made to break fast on Yom Kippur, they’re such a wonderful, and easy-to-make treat that I urge you to try them regardless of your faith. While I do want to preserve the special nature of them, I also plan to make them more than just once a year from this point forward.
Print Recipe Pin Recipe
Prep Time 1 hr 20 mins
Cook Time 4 mins
Total Time 1 hr 24 mins
Servings 6