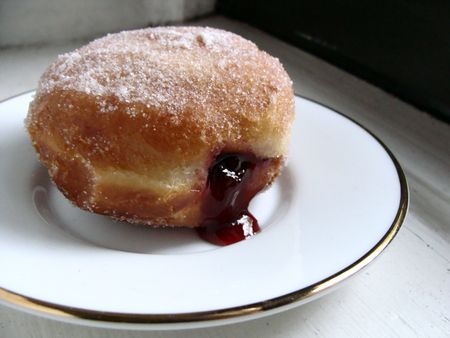 My hands are shaky as I type. Is it possible grating five pounds of potatoes has caused tennis elbow or a torn rotater cuff?

Okay, so maybe I'm exaggerating a bit. Tonight we usher in the first night of Hanukkah, and we're going to a friend's house tomorrow for a party too, so I donned my Jewish grandma apron and settled in for a latke making session today.

I'm about as Jewish as I am a super model, but the Mr.'s mother is Jewish. Technically my girls are not because their mama is a shiksa, but always one to buck authority, I say they have as much right to their Jewish heritage as they do to my Italian one.

I especially love preparing meals for the Jewish holidays, since food is very symbolic. Last week, while listening to NPR, I overheard an interview about a family that emigrated from Russia. Their first Thanksgiving here was perplexing, because they wanted to know why turkey was customary. In Judaism, almost every food on the holiday table has significance. Apples and honey are served during Rosh Hashanah for hopes of a sweet new year. Leavening agents are forbidden during Passover because there was no time to wait for the dough to rise when the Jews were freed from slavery and made their exodus from Egypt.

Hanukkah, which starts this evening, celebrates a miracle. Like history in every religion, there was much bloodshed that led up to the event, so here's the brief story of why this is called the fesitval of lights. In an attempt to purify the Temple after having been desecrated by the Greeks, it was necessary to burn ritual oil in the menorah for eight nights, yet there was only enough left for one. The menorah was lit anyway, and to everyone's surprise it continued to burn for the entire eight days.

So what does any of this have to with latkes, let alone jelly doughnuts? The importance is really in the cooking method. To celebrate the miracle of that oil lasting eight days, preparing dishes fried in oil are customary.

Truth is, I've wanted to make jelly doughnuts for a long time. I'd been nervous terrified of making donuts for years. I don't know why. Maybe it was the deep fat-frying. Maybe it's the lack of willpower to eat them all hot (I had a weakness for the hot donuts sign that used to light up at Krispy Creme on 23rd Street before Atkins craze took over the world).

Anywho, I worked up the courage recently and test drove Lara Ferroni's recipe. It's one of the best and worst things I've ever done. My jeans can attest to that one. I decided Lara's raised doughnut recipe would be a good starting point.

First thing that had to go was the sheer volume the recipe made. Yes, there are worse problems in the world than having hot doughnuts hanging from the rafters, but I decided it would be more respectable to make less, and also make them mini.

I also decided to streamline the recipe a bit. Honestly, it took a long time before I added yeast doughs to my regular routines because I have little patience (just ask my children). All that proofing is an annoying, yet necessary, formality. Rather than create a starter, or poolish, with some of the yeast, flour and milk, I cut to the chase and just made the dough. Provided your yeast is super fresh, you will thank me for this—it means you're 30 minutes closer to eating hot doughnuts.

As for the gift-giving, we've chosen to keep the commercialism of the holiday season confined to Christmas morning. For our family, the tradition here is preserving their grandma's heritage. Besides, it's much easier to say their letters must have gotten lost when Santa falls short on that yapping electric toy they've been eyeing.

One tip I should mention is how to fill these doughnuts. The first few oozed out the sides, and not in an attractive way like that photo up there. Simply perching the donuts with the filled side pointing up for 10 minutes or so, allowed the jelly to settle into place neatly. Mine fit conveniently in the slots on my cooling racks.

p.s. While a stand mixer makes this incredibly easy, I've also made it with a hand mixer with no problem. If doubling the recipe, though, definitely go with the stand mixer.

1 large egg yolk (save white for later use)

Cover bowl and let sit in a warm draft-free place until doubled in volume, about 30 minutes. Gently press dough down, cover and place in refrigerator for 1 hour.

Cliffhanger alert: visit my Cuisinart blog to get the complete directions.