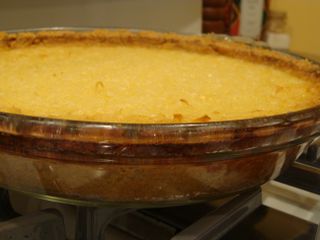 I tweeted about this piecrust made with matzoh a week or so ago. The wonderful thing about being a recipe developer is every time I go into the kitchen it's research and development. This one made it into the Cuisinart Stand Mixer blog, but you can also grind the matzoh with a regular food processor if you don't have the mixer or attachment. Enjoy!

Mom's Italian. Dad was Finish-Flemish. They were both Catholic, but it was my own marriage that brought me into the kitchen this Passover. While, technically nothing I make is considered kosher, I do my best to adhere to the laws of kosher cooking. My mother-in-law is a very arthritic 77 year old, so sweating over the stove isn't high on her list of priorities anymore. Besides, she was more one who cooked to survive than for enjoyment.

I've taken to hosting the Jewish holidays as a way of both keeping her traditions alive and showing her the respect she deserves — her parents had to send her away alone on a train as a child for her safety while living in London during WWII. I also want my daughters to know about their heritage.

I often refer to Joan Nathan's 1988 edition of The Jewish Holiday Kitchen that my mother-in-law handed down to me many years ago. Though there are many traditions followed every year in Jewish kitchens around the world, a lot has also changed. This year, I decided to stir up some change myself. I kept the meal simple with a roasted chicken, Patty Unterman's Potato Kugelettes (like homemade tater tots—on pg. 277 in case you're interested), and knew that dessert would be something coconut. Alas, I wanted something more than the basic macaroons that flood dinner menus on this leavening agent-less occasion.

I started thinking coconut pudding and from there began dreaming of coconut custard pie. I didn't have matzoh cake flour on hand so I decided to grind some matzoh using the food processor attachment on my Cuisinart Stand Mixer. This was seriously one of the quickest and easiest piecrusts I've ever made. It was sturdy enough to hold the weight of an extremely coconut filled custard, yet tasty with the help of some sugar and butter. My research in the Twitterverse yielded conflicting answers on whether it was okay to use butter in an egg-based dessert (kosher law doesn't allow the consumption of dairy and meat products together, so margarine is often substituted). 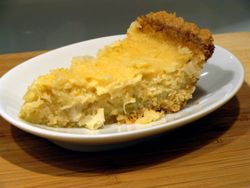 In the end, everyone loved the meal and my husband was amazed at my culinary prowess. And mom? Well, she didn't even know you need flour to make a piecrust but she loved it regardless.

Visit the Cuisinart Stand Mixer blog to get the recipe.