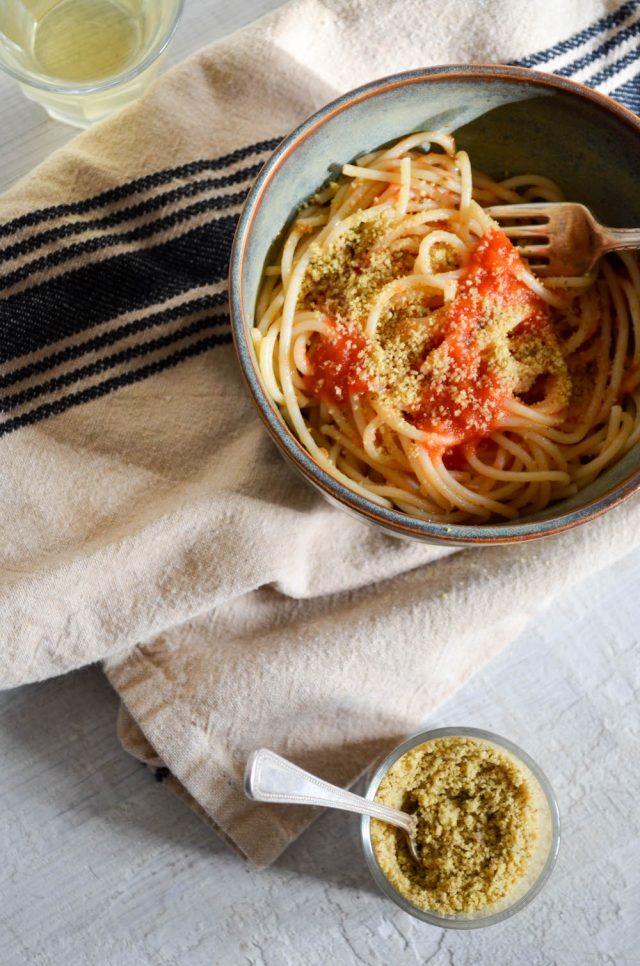 There’s a long of line recipes waiting to see the light of day, but I simply could’t leave this Homemade Vegan Parmesan Cheese to wait its dutiful turn. See, for an Italian-American girl, from Brooklyn no less (we’re a special beed), my new eating habits have been in direct conflict with my eating heritage.

Before we get into the details of the recipe, let’s be clear on one thing. Nothing is an equal, 1:1, replacement for a good quality Parmagiano or Pecorino cheese. If you’re trying to avoid dairy, though, this Homemade Vegan Parmesan Cheese hits some of the essential flavor notes (salty, umami) you crave when thinking about a bowl of pasta.

I’ve yet to use it beyond sprinkling on a bowl of spaghetti with marinara sauce. There are so many uses to explore—risotto, pizza, soups, pesto, so let’s share our collective experiences as we play around with it, yes?

So, what goes into making Homemade Vegan Parmesan Cheese?

Last year, while working on this project, I came across a vegan parmesan that stopped me in my tracks. Unlike many of the other brands out there that are more akin to the overly processed, shelf stable stuff in the green canister, this one from a company called Parma was made with ingredients I knew (and could pronounce). Curiosity got the better of me, and I bought a jar. 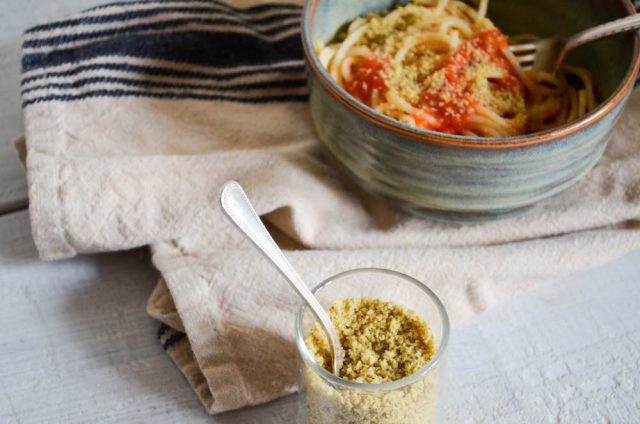 I was seriously blown away. While it was most definitely not the Pecorino I so generously use (maybe too generously), it did fulfill that salty, sharp taste that one craves when reaching for the grater and chunk of cheese to accompany a bowl of pasta.

A few weeks ago, as my mindful eating deepened, and dairy took a big back seat in my life, I thought about that vegan parmesan cheese. I’d been meaning to make it myself, and the time had finally come. I remembered the labeled included hemp hearts (also called hemp seeds), walnuts, and nutritional yeast, so started there, and included some salt, too. Turns out Parma also uses sunflower seeds, but since I didn’t remember that, you won’t find any in my recipe for Homemade Vegan Parmesan Cheese. Feel free to play around, and add them in if you want.

I truly never thought a vegan parmesan cheese could win me over, but this recipe is beyond a keeper. I absolutely love it, and if you need to limit, or avoid dairy, for any reason, but miss the taste of Parmigiano or Pecorino, I think you will, too. 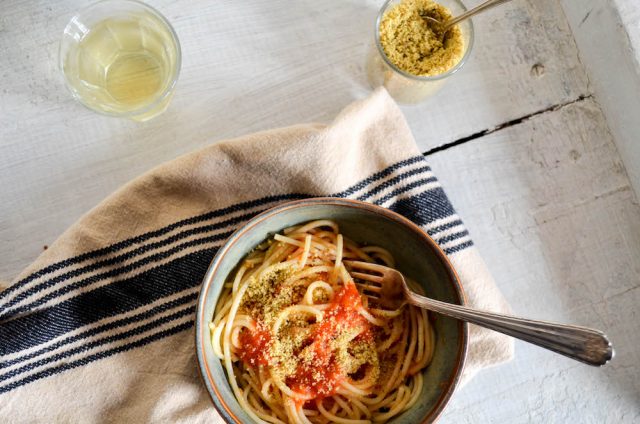