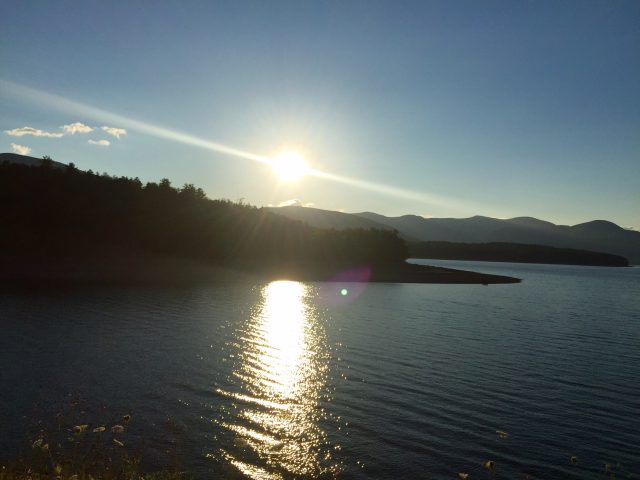 The warmth of the sun enveloping my face is a simple pleasure I don’t take for granted. So often we’re running here and there. Being in the moment seems a guilty pleasure in a culture where value in doing nothing is bankrupt. Michael knew this, and that’s why I think of him every time I stop, close my eyes, and get lost in a sunset, or a sunrise, or any time I’m just drinking up the sun’s warm glow.

On my walk last night I thought about the power outage that shutdown a good part of the northeast, midwest, and even parts of Canada during the summer of 2003. Back then, the New York Times reported it as the largest blackout in American history. I imagine that’s still the case, not recalling another one of its ilk since then.

I was managing a bakery & restaurant in Tribeca at the time. Isabella was only three months old, at home with my mother. Michael was at his office in Chelsea, on 20th street and Sixth Avenue. We were in luck because we still had a real landline. Not the kind of false sense of security today’s cable phone lines provide—by now you realize these are useless in a power outage. Michael’s parents were deaf, so we always had a landline in the event of an emergency so we could reach them via the TTY machine.

Once Michael called my mom, and confirmed she and Isabella were okay, he made the two mile trek down to me. I didn’t know that, though. With no way of getting in touch with him, I was worried, but I was also in crisis mode at the restaurant. As the general manager, it was my responsibility to make sure everyone had a way home. Home for me would come once the rest of my staff was safely on their way. When he walked through the door of the restaurant, I was stunned, relieved, and realized how much I meant to him.

I was his person. He was mine.

It took an epic blackout for me to realize that.

He didn’t think twice. Coming to get me, and make sure I got home safely was beyond a priority—it was a reflex, the most natural thing in the world for him to do.

The Brooklyn Bridge was too crowded—it would take forever to make our way home, walking being the option since traffic was at a standstill, and trains weren’t running. We backtracked to the Manhattan Bridge, a more manageable flow of foot traffic, reaching for each other’s hands every now and again so we wouldn’t get separated.

It sounds like the end of the world, but of course it wasn’t. It was just the biggest, widespread blackout in American history that left us without power for a couple of days. The news these days has me thinking a lot about that day. Except, the fear of a nuclear blackout feels all too real. It’s so easy to say it won’t happen, but with two unstable leaders playing a game of chicken, it’s hard to push the “what if” from my mind.

And he’s not here. My person. My rock. It’s just me, and our daughters. I worry how I will protect them, and care for them alone if that day comes. I try to push these thoughts from my mind, only reading enough tidbits of news so as to not cause restless nights, and worry-filled days.

I’m not always successful, but I keep trying, keep breathing, and keep taking moments to appreciate sunshine on my face.

Music Pairing: Looking at the Sun by Matthew Sweet