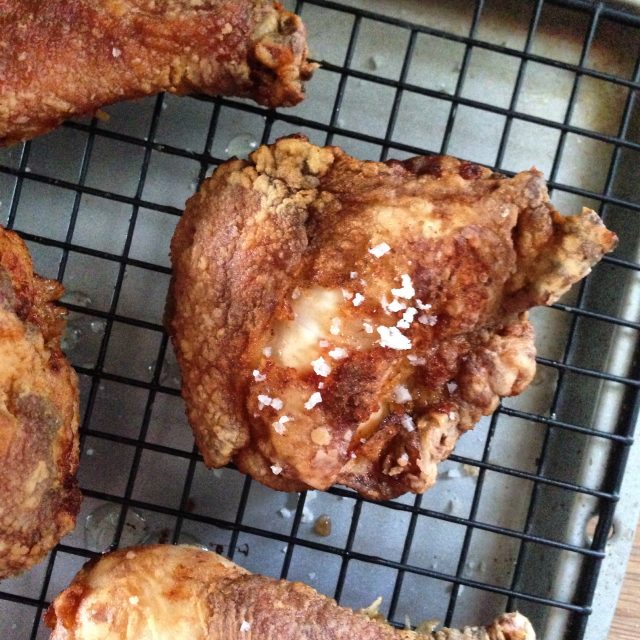 There are moments when I still can’t wrap my mind around it all. I’ve traveled miles I never imagined. Seen and done things, I never thought possible. And yet, today as I drove over the bridge to Rhinebeck, all I could think about is what I was doing at this time three years ago. He was still alive, and the idea that he could be gone in an instant, forever, seems inconceivable, even to this day. I suppose the wonder of it, even reflecting back, knowing what I know, the notion that it could still surprise me—I think that’s called hope. Hope is the fuel our minds need to function even when the rest of our system shuts down.

I’ve found myself cooking a lot of the Mr.’s favorites these last couple of weeks. Just before Isabella left for camp, the urge to make fried chicken was overwhelming. What’s important to know about me is that I don’t really like chicken. When I went vegetarian a few years ago, it was the one thing I couldn’t get jazzed about anymore once I started eating meat again. But my Mr. loved fried chicken. So much so, that when I hosted his 50th birthday party at our apartment in 2010 that’s what he requested. The house was overflowing with as many people as years he’d been alive.

I fried 20 pounds of chicken, slow roasted heaven knows how many slabs of ribs, and the crowning glory was the ring ding inspired cake he asked me to make for him. His birthday fell on Super Bowl Sunday, and The Who played half-time. I joked about how much planning went into making that one happen.

Death may have stolen our future, but it has no claim on our past. It can never erase the 16 years of memories we shared. I am thankful for every second of them—more than three billion.

That’s kind of amazing when you think about life in those micro moments. Today I will choose to be thankful for our time together. I will be thankful that we had an incredible last day with each other, and that he left this world with both of us feeling as in love as the day we met. And when the tears come, as they surely will, I shall welcome their salty warmth on my face, and keep my eyes open for the rainbows that follow many a storm. 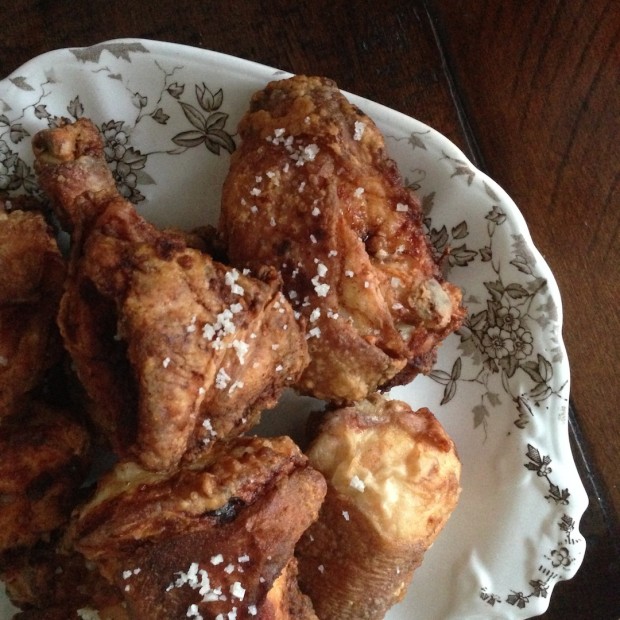 This really isn’t a recipe, but a rough meditation on making fried chicken. Whatever you’ve learned about fried chicken, I can promise you no one has shared the real secret to getting that crisp skin. In fact, when I told one very well known southern chef about the trick another chef told me, her eyes went wide as she said “wow, he really gave away the family secrets”.

These are the two.most.important things you need to know to make incredibly crisp fried chicken every time:

1) Pat your chicken dry before dredging it in flour.

2) Let the chicken rest for 15 to 20 minutes after you’ve floured it, so the flour can set.

The type of flour you use is not as crucial as the resting time. I know, I was shocked by that, too. After years of being a White Lily devotee, I played around with other flours. Necessity was the mother of my recipe testing, after finding myself without a gram of White Lily in the house last week. I decided to give cake flour a try, figuring it was closer in texture to the holy grail of flour. It produced a lovely, light, crispy skin. Almost, too light, but we all devoured it. Even me, the girl who doesn’t like chicken, was lusting after it. A few days later, I made buttermilk fried chicken bites by simply cutting a few breasts into tiny, bite-sized pieces. For that batch, I used all-purpose white flour, and it was great. I have a hunch my “00” pizza flour would be incredible, but my supply is dangerously low. I’m not willing to risk incredible pizza and bread for this experiment. I’ll give that a try when I stock up on more flour.

So, what else do you need to make kick ass fried chicken?

Add some buttermilk to a bowl or heavy duty ziptop bag; the amount all depends on how much chicken you’re cooking. I use about 1 cup for a whole chicken. Add salt, pepper, and paprika, if using. Don’t fret so much about the pepper and paprika; go with an amount that suits your spice preference. Be careful with the salt— a generous pinch should be fine. Add the chicken to the buttermilk mixture. Cover the dish, or seal the bag closed, and store in the fridge for at least 30 minutes, or overnight.

When you’re ready to get frying, line a rimmed sheet pan with a few paper towels. Shake any excess buttermilk off the chicken, and lay it single layer on the pan. Pat the pieces dry with a paper towel.

Add some flour to a pie plate; I use 1 1/2 to 2  cups for a whole chicken. Season with salt (a generous pinch), black pepper, and paprika, if using. Place a piece of chicken in the flour, toss some flour on top, and press the chicken down into the pan so it can get a good coating. Shake excess flour off, and place the chicken on a sheet pan or dish. Repeat with the remaining chicken.

Meanwhile heat the oil in a deep skillet over medium-low heat. The oil temperature should be 350F to 360F. Honestly, I never use a thermometer, and always eyeball it. Just don’t blast the heat, you need a slow, steady flame, or the outside will burn before the chicken is cooked. When the oil is shimmering, is a good indicator that it’s ready for frying.

Add the chicken, being careful not to crowd the pan (or else you’ll create too much steam). Better to fry in batches, or use two skillets if you want to cook it all at the same time. Resist the temptation to poke and prod it, too. Let it go until you see a deep golden outer edge. You only want to flip it once, and turning too soon might disturb the flour coating.

Drain fried chicken on a wire rack set over a sheet pan. Immediately sprinkle a few flakes of salt on top once the chicken comes out of the skillet. The heat helps the salt stick to it. Serve immediately.

Some times I give the chicken a second dredge in flour just before placing it in the oil. It makes for a thicker, double coating, which I especially recommend for making bite-sized pieces.