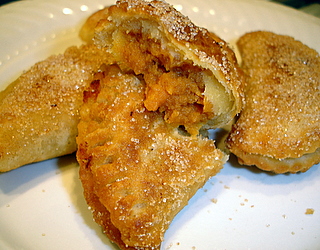 The journey home after vacation is always filled with a bit of sadness. Each year I await our annual trip to hear the soothing sounds of Cape Cod Bay and to enjoy a more relaxed pace of life. But, what I really miss is the two-week love affair with The Portuguese Bakery on Commercial Street in Provincetown. Last year I finally tried a pastry I've been eyeing for some time: trutas. It's a good thing these tiny triangles of sweet potato-filled fried dough cost $2.05 each— it helps limit your intake. Each bite bursts with a savory, sweet potato and cinnamon scented filling…and bourbon.

After returning home last September, I worked from memory and cobbled together notes from a few
recipes I found before hitting the test kitchen. While brandy is called for in some recipes, I opted for bourbon since the sign in the case of The Portuguese Bakery lists it as an ingredient. The amount is mere, at one tablespoon to make 48 pastries, so need to worry about letting kids enjoy these tasty treats.

Portuguese pastries are also traditionally very sweet. I decided to cut back on the sugar since I really wanted the flavor of the sweet potatoes to shine through. While recipe testing, a friend's daughter insisted it was okay to eat as many as she wanted since they're filled with vegetables. While that may not be quite true, they are indeed delicious to eat—especially now that I can enjoy them anytime of year.

I feel in love with this sweet potato-filled pastry at The Portuguese Bakery in Provincetown, MA and set out to make my own on returning home to New York. While some recipes call for boiling the sweet potatoes and draining them overnight to release the water, I suggest microwaving them. It concentrates the flavor and greatly reduces the preparation time.

Freshly grated peel of ½ an orange

To make the dough, add the flour, sugar and salt to the bowl of your Cuisinart Stand Mixer. Mix on low speed for 30 seconds. Add the melted butter, melted vegetable shortening and bourbon; mix on low speed just until wet ingredients are absorbed.

With the mixer on low speed, slowly drizzle in the orange juice until the dough comes together into a rough ball. Dump dough onto a lightly floured counter. Knead once or twice to shape into a smooth ball. Let rest while you prepare the filling.

To make the filling, add the sweet potato puree, sugar, cinnamon, salt, orange peel and nutmeg to the bowl of your Cuisinart Stand Mixer. Mix on medium speed until all ingredients are combined.

Divide dough into four pieces. Roll out each piece to ¼-inch thickness, lifting every few rolls so it doesn't stick to the counter or surface (do not use a lightly floured surface or a floured rolling pin). Scraps can be rerolled until there is no more dough remaining.

Cut into circles using a 3-inch round cutter. Place 1 scant teaspoon of filling in the center of each circle. Fold one half of dough over the other, forming a "half moon" or crescent shape. Place on a parchment lined baking sheet.

Add one-inch of oil to a deep skillet; heat until shimmering. Fry in batches until trutas are deep golden brown, about two minutes each side. Transfer to parchment lined baking sheet and drain for one minute. Roll fried trutas in cinnamon sugar mixture while still warm. Serve immediately or store in an airtight container for up to two days.

TIP: Pierce whole sweet potatoes several times with a fork or tip of a paring knife. Place on a microwave-safe dish and cook on high 7 to 9 minutes (depending on size), until inside is tender and can be easily spooned out. Puree using a food processor until smooth.