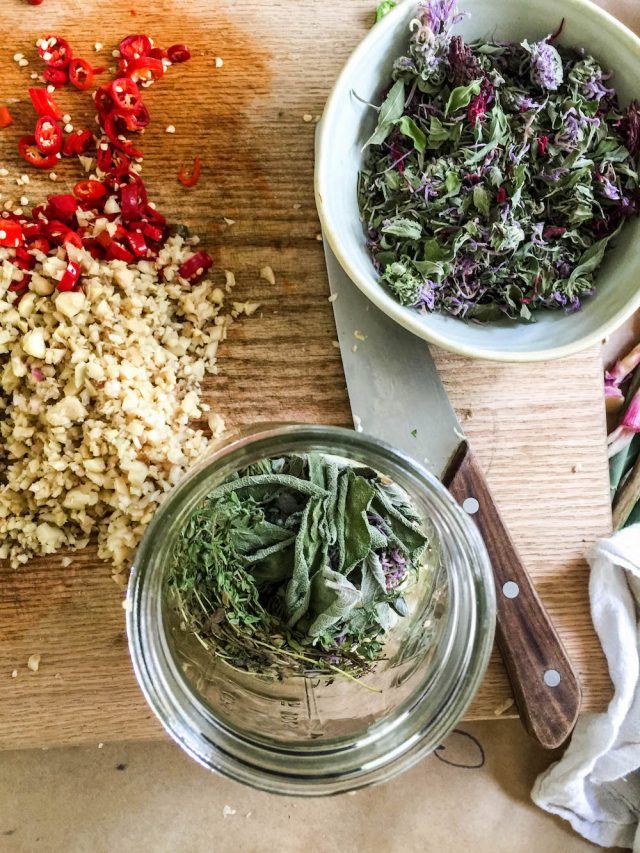 You know how there are things on your To Do list than somehow keep getting nudged to the next day, and the day after that one? That’s the game I’ve been playing regarding making my new batch of fire cider. This morning I finally got it done.  I learned how to make fire cider for the first time last fall, and while I was eager to write about, I felt like I needed time to experience the beneficial claims of it before hopping on the bandwagon.

Fire cider is not some new hipster remedy, even though I did happen to first hear of it at an over-the-top, expensive artisan & craft fair (there was a bookcase selling for $27,000—no joke). The fair itself was way out of my not-a-cool-kid comfort zone but when I read about the fire cider workshop with Lauren from Good Fight Herb Co., I was very intrigued.

I pushed my generally introverted nature aside (no one ever believes this about me, but it’s true. really), signed up for the class, put my hair in braids for camouflage, a smear of red lipstick, and off I went for a 75-minute class last October.

So, what is fire cider? You know how they say you are what you eat? That’s a little bit of the premise behind the healing benefits of fire cider, using a more natural, homeopathic road to battling the common cold. It’s a combination of herbs and aromatics steeped in apple cider vinegar, that when combined, fortify and strengthen your immune system when it becomes compromised or vulnerable.

Some people believe you should take a shot of fire cider every day, kind of like a daily vitamin. You’ll see below that most of the ingredients are beneficial to a regular diet. I lean more towards a friend’s philosophy of taking it at the first signs of a cold’s arrival. Some people like to dilute the fire cider, add a bit of honey, and sip it as a tea. I prefer to take a shot of it a few times a day when feeling “eh”. 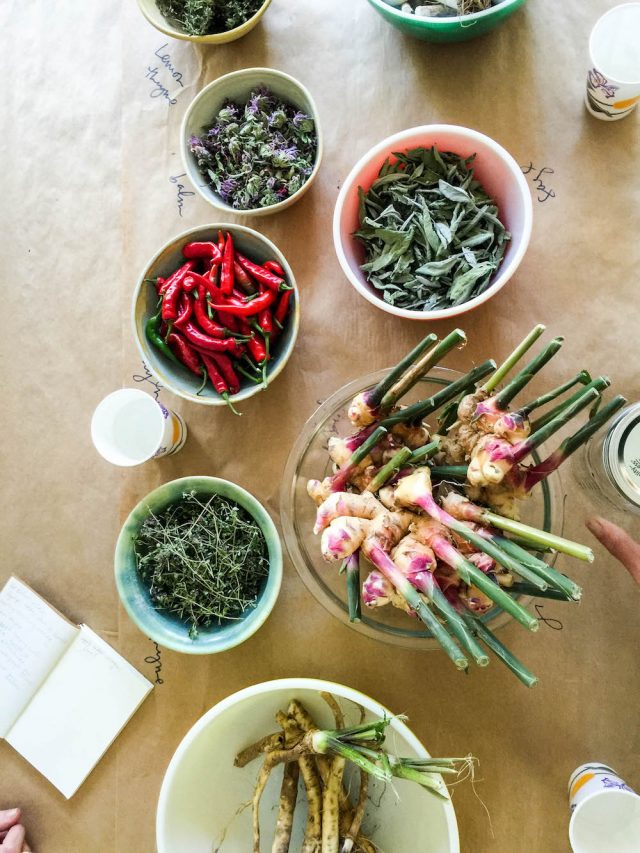 I’ll warn you, that first taste is brutal, and while I want to say it’s an acquired taste, the version I make, which is meant to scare the living daylights out of any germs festering in my system, is not one I’ve managed to grow a fondness for, in terms of taste. That glowing review aside, it’s worked absolute wonders the last year, and that’s why I’m still swearing by it a year later.

The base is apple cider vinegar, a natural digestive aid. As for aromatics, I stick to the basics of horseradish (combats sinus congestion & headaches), ginger root (aids in digestion, nausea, helps fight infection), garlic (antimicrobial & antibacterial), and cayenne (supports a healthy cardiovascular system). Raw onions are generally included, too, but I don’t digest them very well, so leave them out. Heed this advice when making your own fire cider. I have a friend who is allergic to garlic, so it’d be counter-productive for him to use it in his own fire cider. 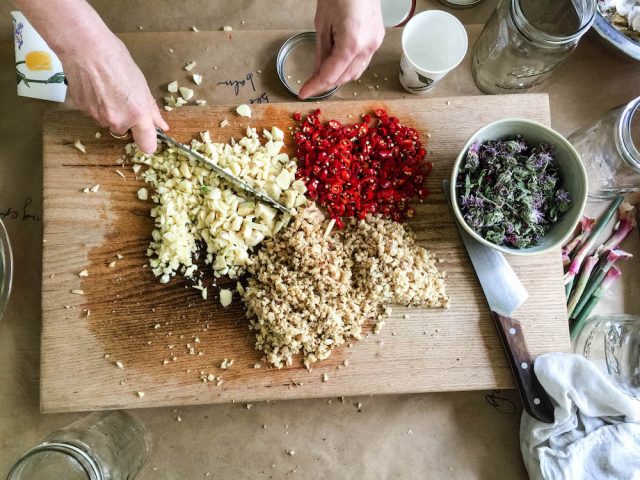 As for herbs, I used sage (reduces inflammation & antioxidant), lemon thyme (soothes sore throats, upset stomachs & coughs), and some lemon balm (anti-inflammatory, antibacterial) this year—all from my garden! Lemon balm, while soapy and medicinal in scent, is also soothing and relaxing. The taste is very unlike how it smells.

You can make more palatable versions of fire cider by adding citrus wedges to it (oranges, grapefruit, lemon). Some people even add cinnamon sticks and cloves. Honey helps balance it out, too, taming the assertive quality of the aromatics. I recommend stirring honey into the diluted fire cider, and not adding it to the full batch as some recipes suggest. My reasoning is you can always adjust with sweetner, but you can’t take it out once it’s in there.

My future self is going to be very thankful come mid-December, when I usually get a sinus cold. It’s been like clockwork the last few years, but last December I managed to avoid a trip to the doctor for antibiotics by chugging fire cider in regular intervals. 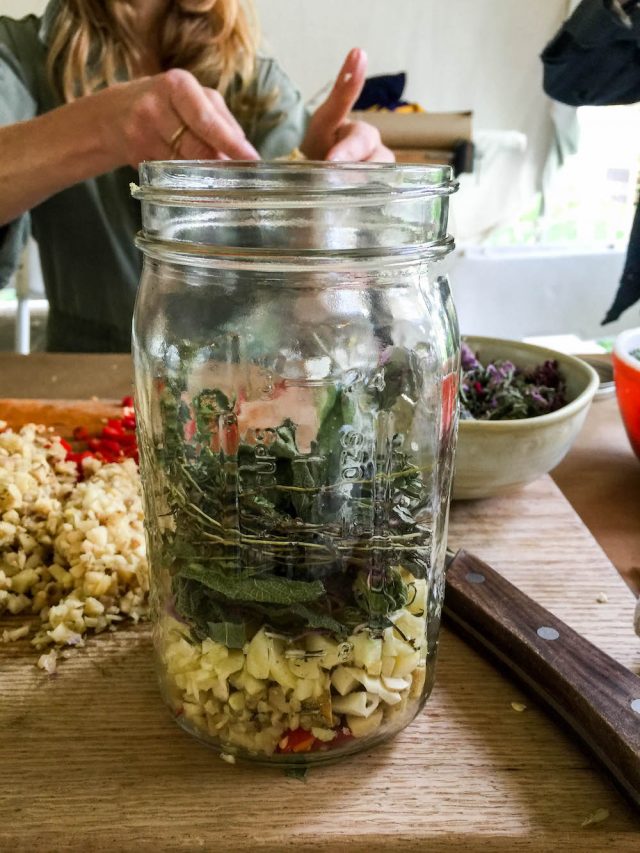 Disclaimer: Homeopathic remedies are most certainly not a cure-all, and this is after all a food blog, not a medical journal. If symptoms persist, you should absolutely consult your doctor because it might be more than just the common cold or annoying sinus headache. 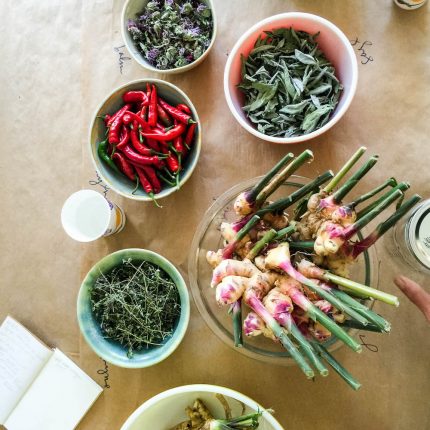 This isn't a recipe so much as a guideline for making fire cider. Use as much or as little of each item. Ultimately you want to fill your jar 1/2 way with aromatics & herbs, and then top it off with apple cider vinegar. Last year I went with a large 4-cup mason jar. This year I decided to make smaller batches in pint-sized jars.
Print Recipe Pin Recipe