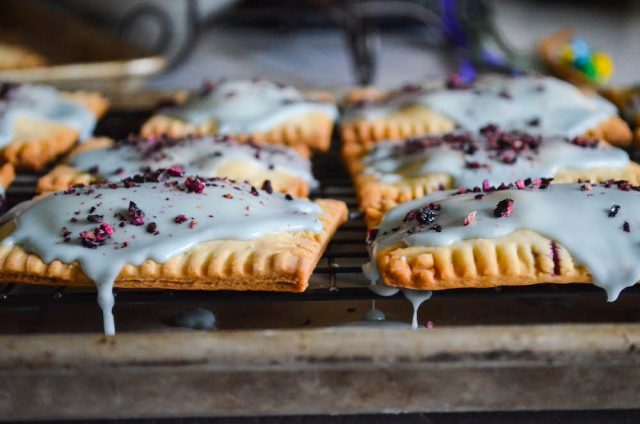 I’ve become a pop tart making machine these days. That surprises exactly no one who knows me. This happens—I become obsessed, and once bitten by a baking project, the process becomes a religious practice. It also helps to have a friend who loves pop tarts as your taste tester, although he does draw the line at savory pop tarts. Actually, I thought he was going to cry when I suggested it, and said it would question his faith in good people. Yes, a bit dramatic, but it made me laugh so hard, and who doesn’t love laughing? I will admit that the idea of savory pop tarts veers more into toaster strudel or hot pocket territory. Alas, there is nothing savory about these Homemade Blueberry Pop Tarts. Promise.

When it comes to making pop tarts, I think the finishing glaze and decoration is as important as the filling. We taste with our eyes first, after all. A couple of months ago, I bought some natural, vegetable and spice based food coloring at Target. I’ve been rather unhappy with the versions available at the health food store, and was more than willing to give this new brand a try. No worries about them imparting any flavor—they do not.

So, the blue food coloring was the first to get a test run when I made the glaze for these Homemade Blueberry Pop Tarts. I wasn’t quite convinced when I first added it, but after glazing them all, I think it’s fun and playful. The fact that it’s free of artificial dyes is a nice side benefit, too. I’d love to hear what natural food colorings the rest of you use, so please do leave a note in the comments. I’ve used Color Garden in the past, and was very unhappy with the results, especially considering how much it cost.

Now that we’ve got the glaze covered, let’s talk about garnishing these Homemade Blueberry Pop Tarts.

Sprinkles are always fun and festive. I’ll admit to telling the kids I would gladly eat a bowl of sprinkles recently. I know, that sounds gross. Sue me. I don’t want to be a one trick pony, though, especially since I plan to make a lot more pop tarts in the future. Lucky for me, I remembered the freeze-dried blueberries in the pantry. I know, not a typical pantry item, but then again my pantry is not run of the mill. 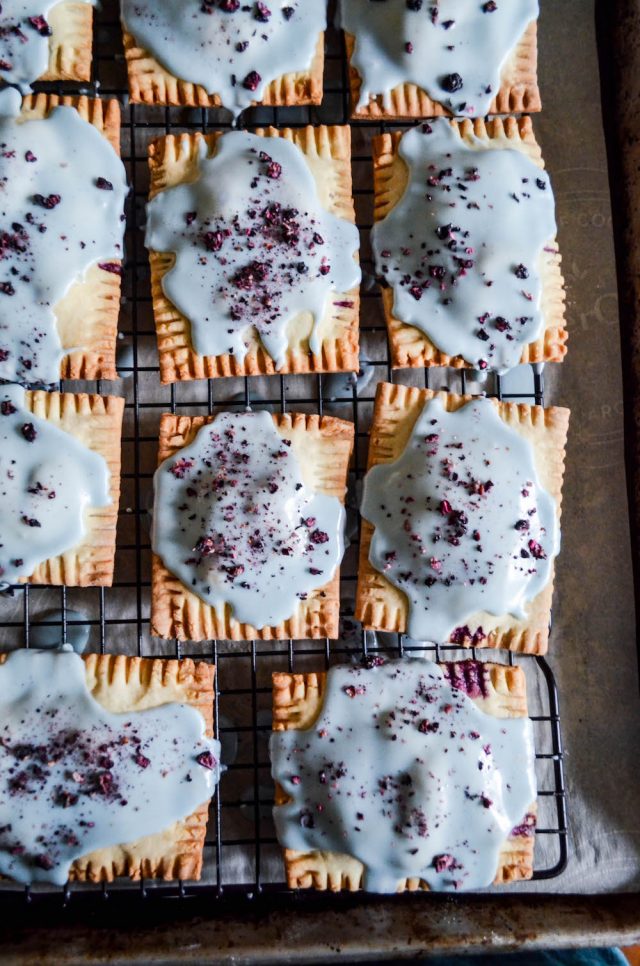 I put some of the freeze-dried blueberries in a ziptop bag, and gave them a few whacks with the rolling pin to crush them a bit. Now I had a garnish that fit the theme of the filling, added texture, and also felt a little more elegant than just your average sprinkles.

Oh, and some good news about these homemade pop tarts. You can put them in your toaster to warm them gently! I did an experiment on a very low setting. It was just enough to heat them slightly, without the icing melting. Of course, toasters vary, so try this at your own risk, lest you do it too high, screw up your toaster, and then come yelling at me. Dare I say that this is the best pop tart recipe, and closest to the store-bought stuff,  you’ll find anywhere. So, tell me, what fillings do you want to see in the future beyond fruit? 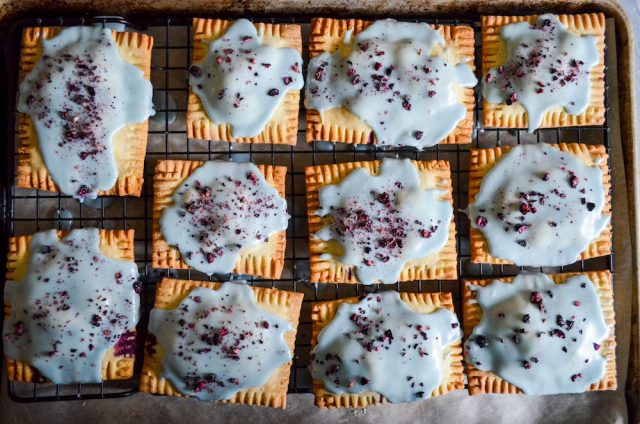 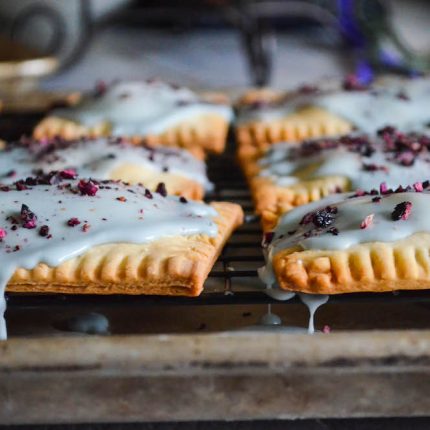