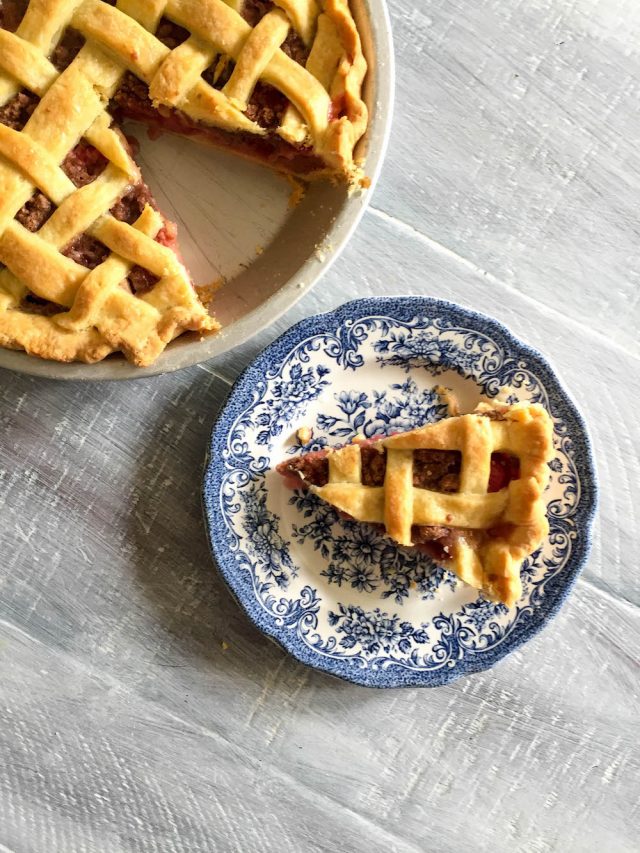 You might be wondering what a Double Crust Mostly Rhubarb Pie is exactly. Well, it’s what happens at the intersection of thrift and indecision. I had a few rhubarb stalks in the fridge. Not quite enough for a pie as I’d originally intended. While I’m still certain strawberry-rhubarb pie isn’t my favorite, though it’s a fine excuse to make, and eat, pie, I did discover I very much like an all-rhubarb pie recently. I started out making a mini one before committing to a full-size pie.

But then I didn’t buy enough rhubarb stalks when I was at the store, so I wrinkled my nose and furrowed my eyebrows, as I searched the fridge and kitchen for some supporting cast members in this particular pie filling. I found three rather large, plump strawberries. They would do, but I decided to chop them fine, preferring them to melt into the filling than be distinctively noticeable.

Then I saw the bits of apple from earlier that morning still sitting on the counter. I had cut some up to pack in the girls’ homeschool hub lunches, and was left with about one-third of a Gala apple. I peeled the skin, and chopped the fruit into tiny bits, too. All the fruit went together in a bowl, along with some sugar, a squeeze of lemon juice, and flour to make sure the filling thickened up nicely.

But I was still left with one big decision. I’d been craving a crumb topping, specifically a chocolate crumb topping. I had a hunch it would pair nicely with the rhubarb. I even had a bag with some in the fridge. I tend to make extra, and keep it in there for such moments. It wasn’t enough, though, and I didn’t feel like making more. What better solution than to throw a lattice crust on top, too? Crazy, I know, but someone has to be willing to take these chances, and I was all too happy to give it a try. 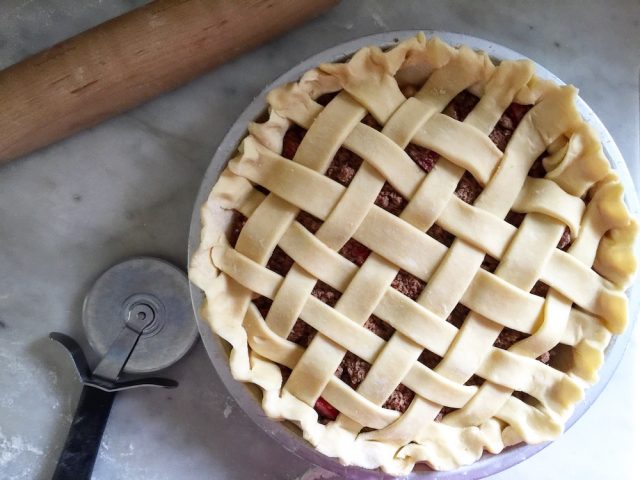 The finished pie was amazing, but really it’s not my opinion that matters. My girls both gave it a double thumbs up, which feels quite fitting for a double crust pie, don’t you think? When I make this again, I’ll put a little less of the lattice on top so the crumb topping peeks through the openings a bit more. You could definitely taste it there; I would’ve just preferred to see more of it, as well.

Ironically, in the end I think I had enough crumb to act as a topping on its own, but then we wouldn’t have known that doing something as crazy as combining a pastry crust and a crumb topping is so delicious, so I think it was all meant to be in the end. 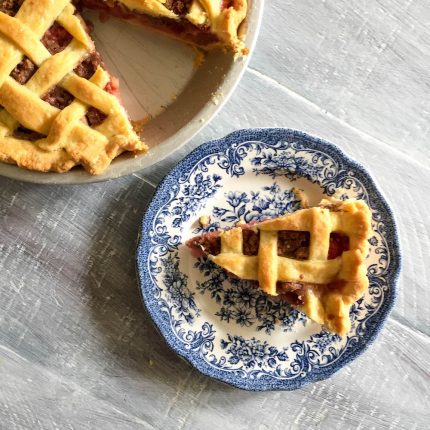