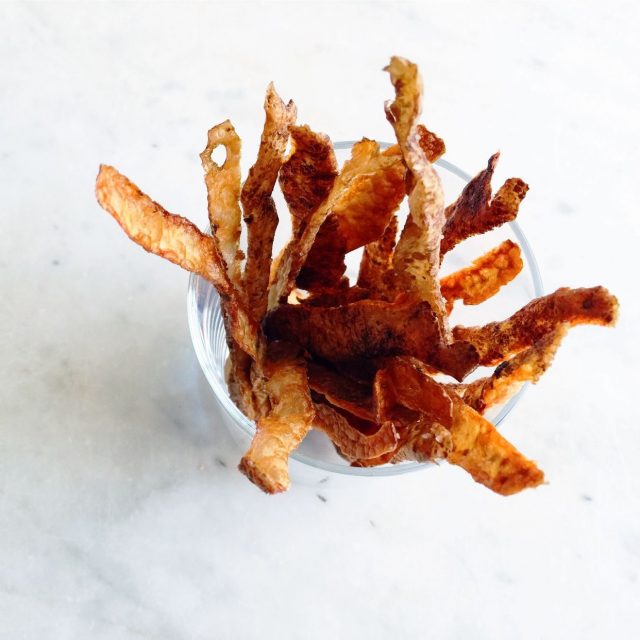 Last week I had a moment while peeling potatoes for soup—that’s how these crispy potato skin straws came to be. I’d just started a new vegetable scrap bag for the freezer. What’s that you ask? Well, if you compost, you can easily discard those trimmings from the tops and bottom and carrots, celery, onions, etc., into your compost bin. That’s certainly better for the planet, but not necessarily your purse. 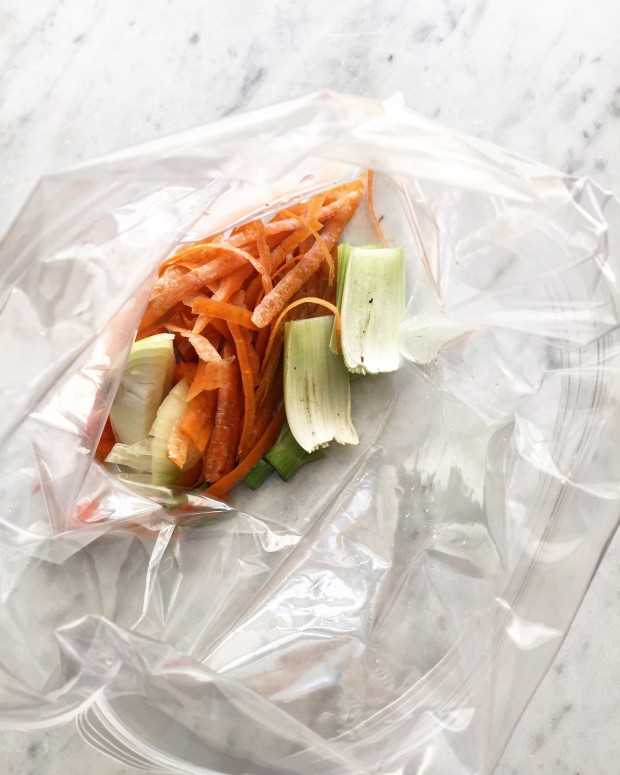 Instead, I keep a ziptop bag in the freezer, and tuck them in there. Once the bag is full, I use them as the veggies for my vegetable stock. You can use it to make chicken stock, too. When I have a recipe that just calls for a little bit of onion for flavoring (like a sauce or soup), I pluck an end from that bag, too. No sense in cutting up a whole onion when a trimming will do the job just fine.  Just be sure to pull the root or end out before serving.

This vegetable scrap bag theory works for most trimmings, but not for all. Potato peelings are a good example. I wouldn’t add them to my vegetable stock for fear it would make the resulting soup too gummy. I once tried to shred potatoes and boil them, thinking I could hack a faster way to make mashed potatoes. Smaller size would mean a faster cooking time, right? What a gelatinous mess. And even worse, it was Virginia’s lunch I was messing with—she was not happy with me in the least.

So, as I set out to start my new trimmings bag, I looked at the potato peelings amassed on the counter, and wondered why not fry them up for a quick afternoon treat? Bingo. Because it’s mostly the outer part of the potato, they have a particularly earthy taste—a win, and different spin on potato chips. I should mention that I used regular ol’ russets here. I’m not sure how these would work with yukons or red potatoes since those skins aren’t as hefty. I imagine they should be fine. If anyone gives it a try, do let us know! 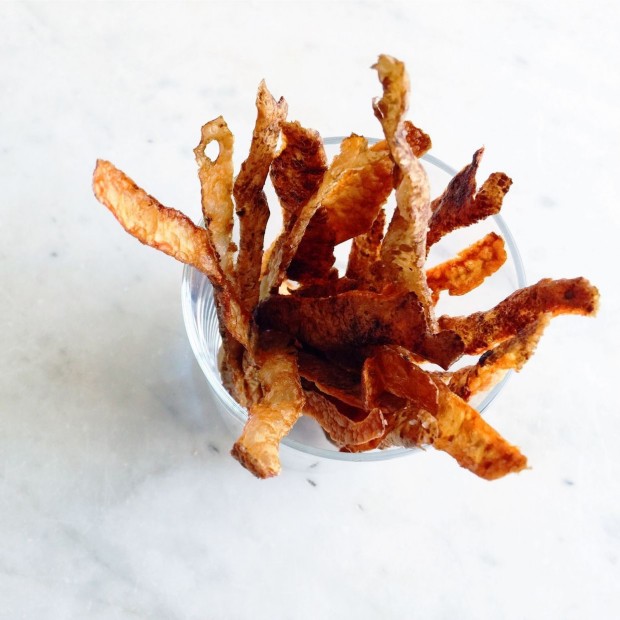 These crispy potato straws are a delicious way use up potato skin peeling. | In Jennie’s Kitchen

Peelings from 1 or 2 russet potatoes

Oil, for frying (a light bodied, neutral-tasting oil, like Grapeseed, is best)

Place the peelings single layer, on a kitchen towel. Fold the towel closed, and pat dry.

Meanwhile, heat about 1/2-inch of oil in an 8-inch skillet, until shimmering. Add the potato skin peelings, making sure not to crowd the pan (you’ll have to do this in batches). Cook until deep golden, then turn, and cook until golden on the remaining side.

Transfer to a paper-towel lined dish to drain. Season immediately with salt. Repeat with the remaining potato skins. Serve hot.