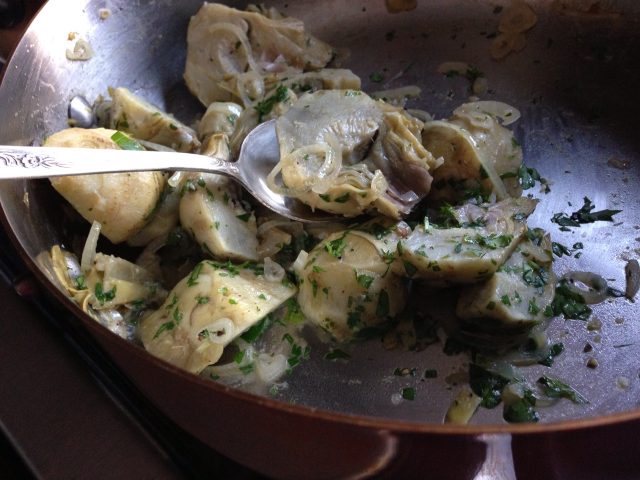 I’ve learned so much about myself during these last 18 months. Yes, it’s been that long—it surprised me a lot today too. My new reality has been like driving a stick, except my previous experience was on an automatic. Now, changing gears is a big part of life, in a way so different from before. The last few years of my life with Mikey were a bit like cruise control, that often happens when you’re juggling family, work and a personal life. It’s easy to fall into habits, especially the ones you love. For me, one of those habits happened to my addiction to farmers’ markets. Not a bad vice to have, if you must have one at all.

I’d wake every Saturday morning to the hum of my alarm, and pop out of bed ready to grab the best of whatever was in season before the throngs of sleepyheads descended for the second wave of market madness. I’d rouse Mikey for a sleepy kiss goodbye before leaving, and tiptoe out the front door, making sure not to wake the kids so he could sleep in a bit more while I went off to play with produce. By 9:00am I’d be back, bounty in tow, and we’d plot the day ahead, as I unpacked the groceries.

Weekends are more of a challenge now being a single parent. The girls are not always on-board with my Saturday shopping agenda. In the beginning, I used to bribe them, offering things my former self would’ve deemed very unacceptable as breakfast food—in my defense, the lollipops were organic and dye-free. Some were even pomegranate flavored, so they were technically a dose of antioxidants, right? Whatever…

In their defense, it was winter when I tried to get back into my market routines. I can’t blame them for not wanting to bundle up and leave the cozy confines of their jammies to satisfy my locavore urges. Once the weather warmed up, it was much easier to pry them from their beds. It helped that there’s also an awesome kids’ park by the Union Square Greenmarket.

And here we are back under winter’s cold grasp, except this time around I don’t feel like my children are plotting against me. Spending the month in Paris last July gave me a chance to reevaluate my relationship with the ingredients I use. My old self was a little out of control, and the lines became blurred with my need to source everything as locally as possible.

As I write these words, I fear they’re not coming out as I wish. See, I’m not saying the local, sustainable movement is not an important one. I still feel as strongly about it as ever. The difference now is how I support it and manage my own time. Now, I walk out of my way to get this milk from Union Market on the days I can’t get to the farmers’ market. I eat a lot less meat because a visit to Grazin’ Angus Acres isn’t always in the cards on Saturdays or Sundays (by the way their milk rocks, and I’m seriously missing their eggs—Keith are you listening to me?).

Union Market also carries a decent amount of local produce, so I can usually get what I need when I find myself in the midst of a busy week, unable to get to the farmers’ market. Once the weather warms up again, I know the girls and I will get back to our market routine. For now, I don’t mind the new lazy Saturday mornings. A girl still has to eat, though.

A few weeks ago, my friend Marina and I were talking about frozen vegetables. She grew up in France, and said it wasn’t unusual to cook with them there. She also said the quality of them was much better than what we have in supermarkets here in the U.S., and I agree. Her words were still echoing in my mind when I found myself in Chelsea Market at Buon Italia staring at the bags of frozen artichoke hearts. I played a game of putting them in my basket, then returning them to the freezer case, a few times before deciding it was a low-cost investment to try them out. Worst case, I’d be out a few bucks. Best case scenario, I’d be able to enjoy artichokes year-round (and let’s not forget no need to clean the frozen ones!).

I bought them, and tried not to think about all the miles they’d traveled from Italy. The frozen artichoke hearts posed a triple threat—to my carbon footprint, and my commitment to local and seasonal eating. Part of my former self bitched slapped my new self for buying them. My new self flipped the bird to my old self, muttering something about this being a “brave new world”. Of course, using frozen vegetables is not an epiphany. Like they’re canned vegetable counterparts, which I grew up eating, frozen vegetables make their way to many shopping carts as a matter of thrift and ease. For me, though, this was my chance to remind myself why I cook.

I don’t cook for the sport of it. I lost a little sight of that fact in my madness to get the best bunch of broccoli rabe. It’s what you do with the ingredients that matters most. Cooking nourishes my soul and steadies me in a way nothing else has the power to do—I get the incredible bonus of feeding the people I love most in the process, and for me that’s pretty damn perfect in an often imperfect world. 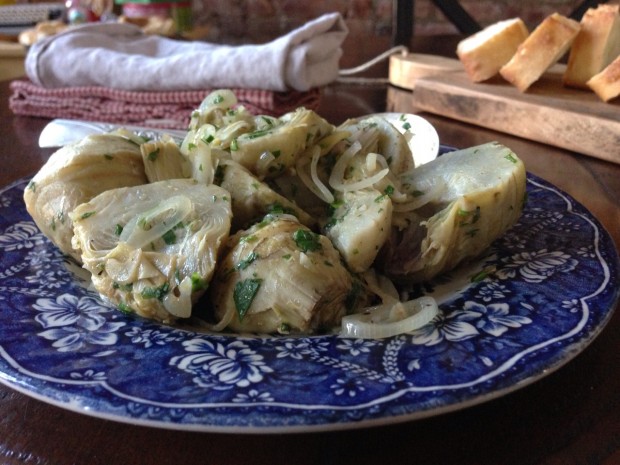 Music Pairing: Beginning to See the Light by The Velvet Underground

This simple preparation makes for a tasty side dish, or becomes the base for an easy dip. Just give it a whirl in the food processor until it becomes smooth—add a little extra olive oil for a creamier consistency. I went light on the butter, because well, it’s the New Year and all. I won’t judge if an extra teaspoon or two fall into your skillet. If you want to keep this vegan (yes, I really am following my extra butter comment, with a vegan-friendly note!), just skip the butter, and use extra olive oil.

Sea salt and pepper, to taste

Add the artichoke hearts to a 10-inch skillet. Fill with enough water to cover the chokes. Cover, and bring to a boil. Uncover the pan, and reduce heat to a simmer. Cook until the chokes are tender, 10 to 15 minutes.

Drain the artichokes, and set aside. Use a towel to wipe the skillet dry, or use a clean skillet if you prefer. Place the skillet over medium heat. Add the butter and oil. Once the butter is melted, add the shallot and garlic. Cook 1 to 2 minutes, until lightly golden. Add the drained artichoke hearts, stirring the pan to mix everything well. Cook for 2 minutes, stirring occasionally. Pour in the vermouth, stirring to scrape up any browned bits from the bottom of the pan. Cook for 1 more minute.

Stir in the parsely, and serve while still warm.