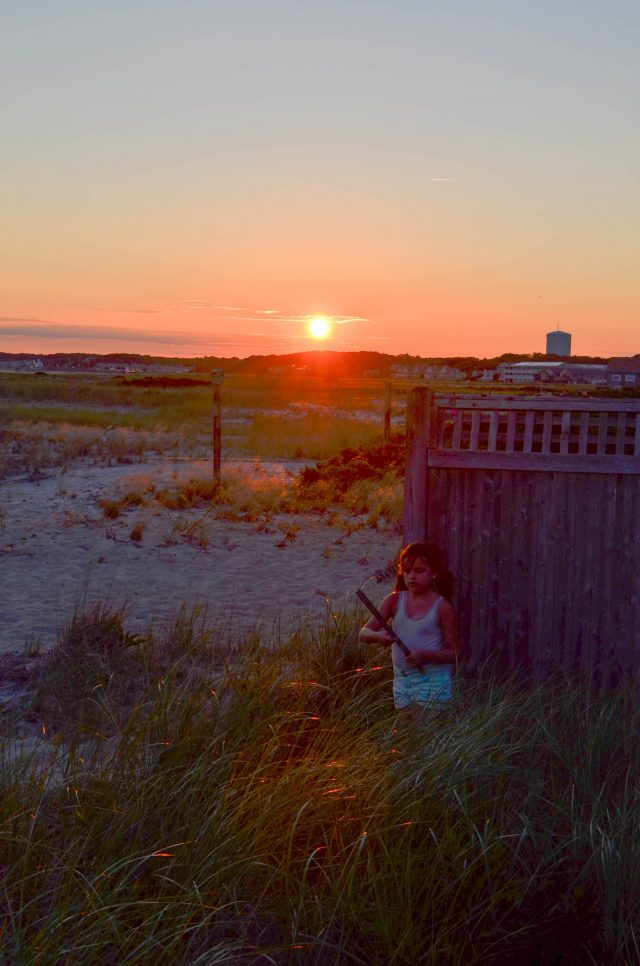 Sunday mornings are all about slowing down, at least they used to be. It’s been a long few years since I’ve been able to get back in that groove. I felt a little closer this past Sunday. Instead of cozying up to my computer to do some work, as I often do before the kids wake, I did some planks and work with my laughably light 4 pound weights.

I stared out the sliding doors in the living room of our cottage, and could see low tide was peaking. Work could wait; enjoying life could not. Especially not when my time with the beach as my backyard is limited. So, I made a cup of tea, and decided to take a walk to low tide. My solitary plans were thwarted when Virginia came rambling out of the bedroom. It would be a different kind of walk, the kind littered with mommy and baby (I know, she’s 8…) footsteps, incessant chatter because my children are like wind up toys in perpetual motion from the moment they rise.

Bella woke up shortly after we got back from the beach. And the house was alive. The kids toasted their Portuguese muffins for breakfast, Virginia slathering peanut butter and nutella on her’s. I cut up some melon, and then got to work on frying up some zucchini. The days I can make my mom’s scrambled eggs with zucchini & pecorino are limited as the pages turn from summer to autumn.

Before setting about to make breakfast, I put on Bridge Over Troubled Water. I knew six or seven songs in, it would come on. One of his favorite songs—The Only Living Boy in New York. In the early days I couldn’t listen to it without salty tears burning my eyes. Five years later, though, I find so much joy and comfort hearing it.

I stood at the stove, frying up zucchini slices, the oil splattering every now and then. I put the song on loop, not willing to let the moment go. The last time I did that, I’d been prepping the chicken pot pie for Homemade with Love, the mood immensely different. Back then there was a weight in the air. It was the first time I was making his favorite recipe since he died.

On this Sunday morning, though, things were different. I’ve spent the last six summers walking the beach with our girls, seagull tracks replacing his footsteps. Countless meals have been cooked in the kitchen where we danced, and would fix each other’s coffee in the morning.

The steps are familiar now, hard as they may be to take alone. On this particular Sunday, though, I was thankful to have found the joy in the journey with him, instead of getting lost in the sadness of his being gone.