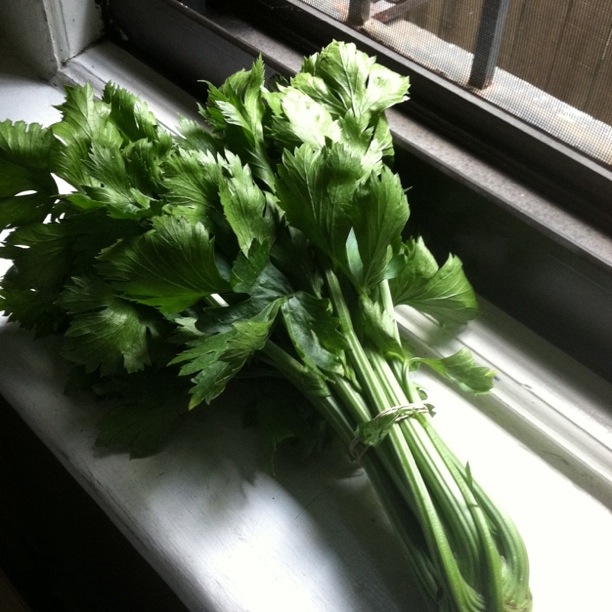 To the rest of the world, this simply looks like a bunch of celery. Albeit an incredibly gorgeous, delicate bundle, with a flavor only celery from the farmers’ market could possibly capture. That bunch in particular probably came from Maxwell’s Farmstand at the Grand Army Plaza farmers’ market.

I feel the lump welling up in my throat as I write this, and yet I can’t pull my fingers away from the keyboard. I feel crazy even going “there”, but that celery is the last bunch of celery I bought while Michael was alive. It’s celery for heaven’s sake, and it’s capable of reducing me to tears. At moments like this I want to bury my face into a pillow and collapse into a pool of tears. I bought that celery the day before Mikey died. I came across it while looking through my photo archives for a recipe of the Broccoli Rabe & Fresh Ricotta Frittata from Homemade with Love, and suddenly found myself frozen as I inched closer to the photos I took in the days leading up to his death.

It’s not just a bunch of celery, just like these aren’t just a box of matches.

It’s a bunch of celery on the windowsill of our old apartment…in the kids’ old room, which was actually our bedroom before we even had kids.

That celery represents something I can never have again. That celery represents a routine I so loved, and have struggled to get back into the last 20 months. See, before Mikey died, I woke up every Saturday morning at 7:00am, got dressed quietly and snuck out of the house to go to the farmers’ market at Grand Army Plaza. I would beat the crowds, and get the best of whatever was in season before most people had rubbed the sleep from their eyes.

In the days, weeks and even months after he died, going to the market was very hard. I might even say painful. As each new season came, the food just tasted different. It was a year of firsts, and that included so many firsts for my palate too. All those familiar flavors suddenly left a strange taste in my mouth. There was no one to share in my excitement, at least not the person I wanted to share it all with.

Slowly, as each day passed, I learned to taste again—but not the way people usually taste. I learned to taste the way a recipe developer experiences flavors, by just looking at the vast array of ingredients at the market. That gift was returned to me while writing Homemade with Love. I sometimes think it was crazy to take on writing my first cookbook just four months after losing Mikey. Looking back, I now realize working on this book gave him back to me in a way. It reminded me of all the little firsts we experienced during our 17 years together. Homemade with Love is so much more than a cookbook, it is a scattering of love letters with recipes. It’s represents my old life and new life, kind of like a deck of cards that have been shuffled. As each day passes, I work at sorting out the cards to put them back in some kind of order that makes sense.