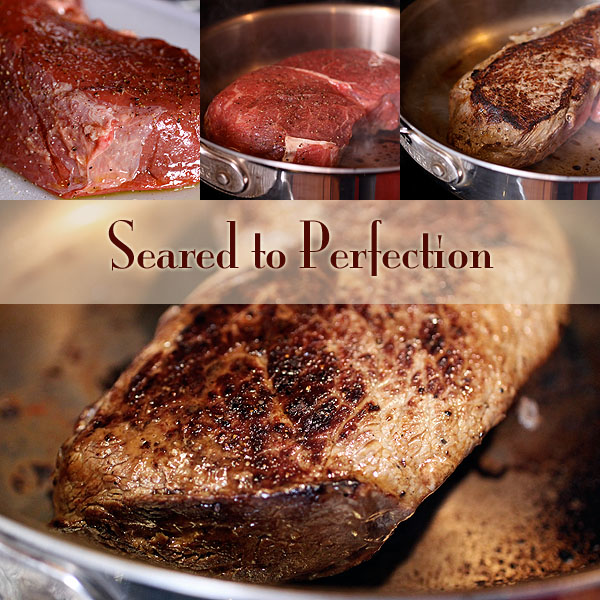 Jen from My Kitchen Addiction joins us again today with a great technique lesson on searing beef—perfect for all the fall stews and roasts we’ll be cooking.

As the weather turns cooler and the days get shorter, I start to crave the hearty, comforting dishes that my mom made when I was young. I remember sitting by the window in the evening waiting for my dad to get home from work, smelling beef stew simmering away on the stove.

In order to get the most flavor out of your beef, whether it is for a roast or for a stew, you must first sear it.  When you pan sear beef, you quickly cook the outer surface of the meat at a high temperatures so that it caramelizes and forms a crust.  The intention is not to thoroughly cook the meat, but simply to get nice color, texture, and flavor on the outside of the meat.  An additional technique (roasting, braising, etc.) is typically applied to fully cook the meat after it has been seared.

While it is commonly thought that searing a piece of meat locks in the juices, that is not technically true.  Alton Brown disproved that theory on his popular Food Network show Good Eats.  Searing the meat does, however, provide additional flavor and rich color.  Many people also like the contrasting texture of the seared crust and the interior of the beef.

Let’s first discuss searing beef for a roast.  To sear beef for a roast, heat a large, heavy bottomed skillet (either cast iron or stainless will work perfectly) over medium-high heat.  Coat the bottom of the pan with oil.  The surface of the oil will shimmer when the skillet has heated properly.

While the pan heats, pat the surface of the beef with a paper towel to remove any excess moisture.  For a simple preparation, simply season the beef with Kosher salt and freshly ground black pepper.  If you prefer, you could rub the meat with spices for additional flavor.

Once heated, place the beef in the skillet.  It should sizzle and may even smoke a bit (be sure to turn on the fan over your stove just in case).  Allow the beef to cook for a minute or two before turning.  Resist the urge to move the meat around in the pan.  Once the beef has cooked on the first side, turn the beef and cook for a minute or two on each of the remaining sides of the meat.

After each side of the meat has a richly colored, caramelized crust, the roast should be removed from the pan and can be transferred to a roasting pan to finish cooking.  Be sure to take advantage of the browned bits in the bottom of the skillet.  Add beef stock or wine to the pan to deglaze and capture the rich beef flavor for a sauce or gravy. 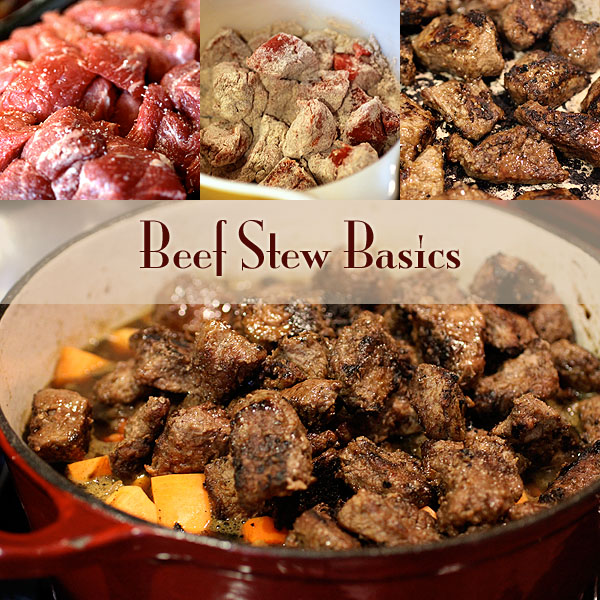 Searing is not just for large cuts of beef, though. When preparing beef stew, the cubed meat should be seared prior to being added to the stew.  If you will be cooking your stew in a dutch oven or large heavy pot, the beef can simply be seared in the bottom of the pot prior to adding the other ingredients.  As described above, heat a small amount of oil in the bottom of the pot until it shimmers.

When I make beef stew, I like to dredge the beef in flour and spices before searing it.  The flour helps to form a crust on the outside of the beef and also helps to thicken the sauce once the liquid is added to the stew.  Once the beef is lightly coated, add it in small batches to the hot oil and cook for a minute or two on each side.  Be sure not to crowd the beef in the pan.  If the pan is too crowded, moisture will collect and the meat will steam instead of developing a richly colored crust.

Remove the first batch from the pan and repeat with the remainder of the beef, adding a small amount of oil, as necessary, to coat the bottom of the pan.  Once all of the beef has been seared, it can be removed from the pot while vegetables are sauteed and the pan is deglazed with liquid (typically stock).  Return the beef to the pot to simmer slowly with the vegetables in the stew.