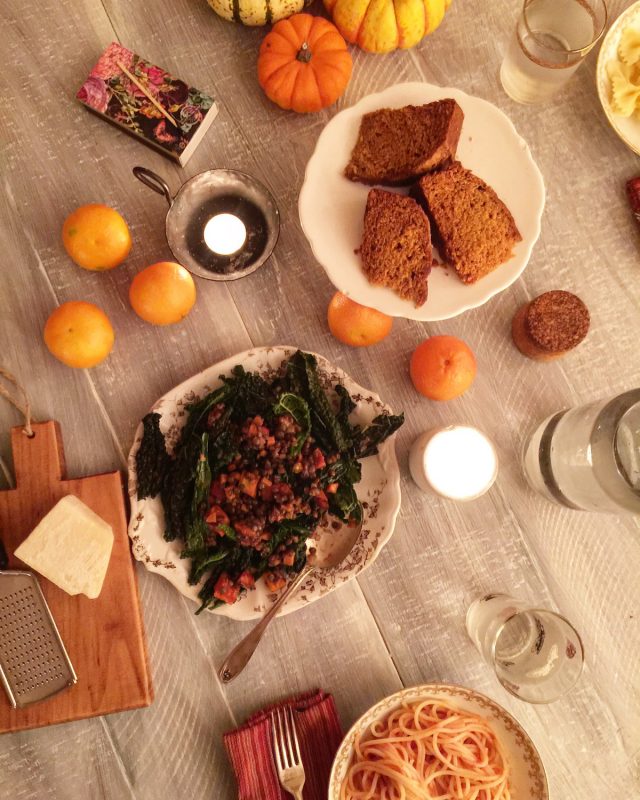 Before you start reaching for the calendar, there’s been no time travel into the future. It is indeed Tuesday, and not Thursday, provided you’re reading this the day it was published. All bets are off on day and time if you’re reading beyond November 22, 2016.

We’ll all be busy plotting, planning, cooking, and many of us also traveling this week. It is for that reason I decided to write, and share, my Thankful Thursdays column in advance.

Something happened Sunday night, and I felt it important to talk about it here. I’ve been trying to dig deep within myself to find understanding for why anyone could forgive the rhetoric, thinly veiled lies, and abhorrent behavior of Donald Trump. The focus for so many of us has been around racism, sexism, and equality. These are extremely valid focuses, and ones that I feel especially strong about. I, sadly, believe deep down that for many people Make America Great Again was code word for Make America Great for White Men Again.

But, for the very first time since the election, I came across a story that expressed none of this. The story of the residents of McDowell County in West Virginia, a coal mining county that garnered the most support for Trump than any other place in the U.S., is not one of people unwilling to change. It is a story of how fast changing economies, the search for cleaner, more efficient forms of fuel, coupled with rising costs of living, lack of jobs, lack of education and lack of professional development created a perfect storm. A storm that rages less than 700 miles from where I live.

Republicans are anti-government, against entitlements, and believe in pulling yourself up by the bootstraps. That’s much of the sentiment I heard while listening to the Trump supporters that journalists chose to interview during the election season. But what happens when you can’t afford to buy new bootstraps once your well-worn, and hard earned ones, have broken? That, to me, is where McDowell County lies, caught in the crosshairs of ineffective government. It’s a shame that Hillary’s soundbite was misconstrued, and misrepresented to these residents. This article explains exactly what she meant, but in our short attention span, soundbite culture, it was manipulated against her.

The video I watched was produced by The Guardian. The videos by Paul Lewis were some of the best coverage of our election. Why was a British news outlet able to do what none of our media outlets could do? After watching the video, which a friend posted on Facebook, and reading a comment by another friend, asking “how can we help these people”, I decided to find an answer to that very question. All it took was a Google search, and some digging, to learn about Five Fishes & Two Loaves Food Bank Inc.

I then posted this on my Instagram feed along with the photo you see above:

“Simple, humble, and satisfying. Something to think about as we head into Thanksgiving. So many will not have this, and many of them are people who cast a vote in hope of bettering their lives, and when the false truths come to light, they will be hit hard like the rest of us. Today I watched a video about McDowell County in West Virginia. Trump was more popular in this coal mining county than anywhere else in America. There was no talk of racism, sexism, or homophobia. These are people who have lost their livelihood due to changing times, and increasing independence from coal for cleaner, more efficient forms of energy. Some of the older workers can’t read or write, so learning a new skill isn’t as easy as we might think. I’ve struggled with trying to understand the Trump voters, to find empathy beneath the incredible hurt I feel in the votes they cast that will have a detrimental effect on our humanity here in the U.S.

Trump promised to bring their coal mining jobs back. We know this isn’t going to happen. I’m frustrated, angry, and want to blame someone, but right now that is not going to help these people. So, I did what Trump would never even think of doing. I’m going to share some of what I have with them. I located a food bank, called Five Loaves & Two Fishes Food Bank, Inc. They distribute exclusively to residents of McDowell County of WV. Tonight I made a donation to them. You can find them by doing a search on Facebook. While I still can’t quite reconcile my feelings, tonight was about extending a hand, crossing party lines, and opening my heart to my fellow humans. Tap on @jenniferperillo for the link to donate. $25 sends a child home with a back pack full of food. $150 feeds a family of four for one month.”

In 12 hours, I watched donations totaling more than $700 pour into their fundraising campaign. I woke up on Monday morning to an email from someone at the food bank, thanking me for my donation, and asking how I found out about Five Loaves & Two Fishes. This was my reply:

“It was my pleasure to make the donation. There are so many people in need in our country—in need of food, work, and hope, most especially these last 12 days since the election. I found your organization through a little detective work of my own. A friend posted a link to The Guardian video about McDowell County, and the particular issues facing the residents of this area. In the comments of her post someone wrote “what can we do to help these people?”. And so those words sat on my mind as I cooked dinner for my daughters.

I decided to do a Google search “McDowell County WV food bank”, and Five Loaves & Two Fishes Food Bank Inc. came up. I did a little more digging to make sure it was a legitimate group since sadly it’s not always transparent online, and felt confident that this was indeed a charitable organization that offered direct results to those in need in McDowell County.

So, why McDowell County when I live in New York (upstate, near Woodstock)? Well, my family, like millions of others have been hard hit by the election results. We’re tangled in issues of race, sexism, and homophobia. We fear that the rights fought, and hard won, over the last few decades will be chipped away at. A particular interest for myself as a widowed mother of two young girls. There is much confusion, and finger pointing as to why someone would forgive such rhetoric set forth by Donald Trump, and not see the dishonesty and lack of integrity behind his words.

Then I watched The Guardian video. There was no talk of hate, just hope, clinging to hope that someone could change the situation there. Personally, I don’t believe the President-elect and his administration will live up to their promises, and quite honestly, our climate can’t afford to embrace an inefficient form of energy. Regardless of what our administration does, I believe as Americans we all need to be stronger together, and help lift up people in hard times.

I know the challenges in McDowell County are many-fold, and will require multiple solutions. It’s my hope that as a fellow human being to use my reach to help my fellow Americans see that love is much stronger than all the awful words and actions people so easily succumb to in the name of protecting their status. Beyond skin color, gender, and sexual preference, we are all humans. I wish the world could see it as clearly as I do.

I hope that shedding some light on your food bank increases awareness and help for the residents of McDowell County. May this holiday week be peaceful and kind, and your Thanksgiving celebrations be blessed with much love.”

So, this is what I’d like to leave you all with as we head into Thanksgiving celebrations with friends and family. Thursday is undoubtedly going to be stressful for many people as they gather around a table, trying to bridge the divide that has grown from this election, and its results. I can’t tell you how to rationalize it all. I most certainly won’t say blood is thicker than water because my own life lessons have proven that to be a false truth.

But, what I will ask is that as you sit down to a bountiful meal, be thankful for every morsel of it. Take none of it for granted, and know that the plight of residents in McDowell County, and I’m sure many other places like it, could easily be any of us. And it’s once you see the world through that lens than you can understand it’s our obligations as human beings to care for each other. Some say it’s not government’s job, but if the people running our government are human beings, then shouldn’t that be a given? So, until our government makes it their priority to be a leader, and care for all Americans, let’s live up to our individual responsibilities as human beings.