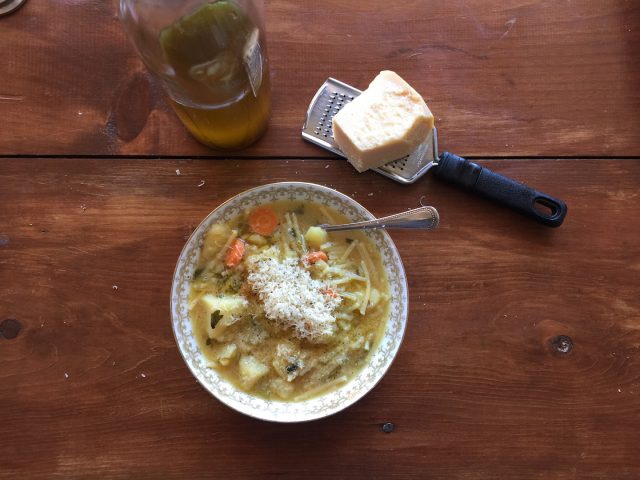 I’m working hard these days to digest the advice I frequently dispense to my girls. The holidays took quite a toll on me. Nothing I care to go into here, but come December 31st, I was spent, and ready to wipe the slate clean with a new year, new goals. What I would tell my girls is that every day should be met with the optimism of a new year. I try my best to stay focused on the good moments for them; to remind them that hope exists even when you have to dig deeper than you’d like to find it.

Just as my mind was thick into my malaise on Monday, I came across a recipe that shook me from my slumber. It’s from an extraordinary writer, and recipe developer across the pond. I’d like to say Rachel and I are friends, but we’ve never actually met. Like so many relationships these days, it’s one through a screen. I’m always taken with her kitchen sink photos, and stories from Rome, where she lives. I’ve no doubt that if we lived closer, we’d be pals, indeed.

Rachel shared a recipe in her Guardian column for a seemingly simple soup. Nothing special-looking on the surface—pasta and potatoes. Two foods, as she notes, most of us might think an odd coupling. The moment I saw the photo, and read her article, I knew this soup was my destiny. It’s a soup of sustenance; the ingredients humble, unfussy, and reminded me of something my nana would’ve made to stretch her paycheck to feed four kids back in their railroad apartment in the 1950s. Surely, she wouldn’t have been able to afford a good quality olive oil, and who even knows if it would’ve been available to her back in Brooklyn. I have faint memories of my mom adding potatoes and pasta to her chicken soup when I was a kid, but I could be wrong. I think it’s the chicken soup from Caputo’s that tethers me to Rachel’s soup. The recipe, based off of the owner, Frank’s, mom’s recipe includes potatoes and thick strands of fettuccine. Time has a way of etching in the memories we long for, erasing the experiences as they really happened.

A quick stop at the grocery store after dropping the kids at school, and just an hour after reading Rachel’s story, my own pot of pasta and potato soup was bubbling away on the stove. I’d taken out turkey stock a few days earlier to make hot pots, so decided to use that in place of water for my soup. As I poured in the turkey stock, quite thick from having slow roasted in the oven Thanksgiving night, memories from that day settled around my shoulders like a comforting cloak.

Forgive my somewhat blurry photo above. I rushed to snap it before the cheese melted into the soup, and was eager to eat before running out to catch an afternoon movie. Decadent, yes, and I enjoyed seeing Youth. It was a bit peculiar, and I’m still digesting it, but glad I snuck away in the middle of the day to see it.

When I ate the soup for lunch, a generous grating of aged Parmigiano-Reggiano cheese was fine, but left me longing for the salty, assertive kick I knew Pecorino would add. One more stop at the grocery store after school pick-up, and my Pecorino dreams were fulfilled in the bowl I slurped down for dinner. So, thank you Rachel for sharing your soup with me. It was exactly the recipe my scattered mind and heart needed to feel grounded, and find comfort.

p.s. that window down below there is a little experiment I’m trying out. You know how authors have audio books? Well, I thought it would be nice to hear my voice in this post. Let know what you think, and if this something you’d like to hear more of in the future.

View the original recipe as printed in the Guardian here.

Rachel mentions in her recipe that it’s more a guideline than strict instructions. I would say the same for what I’m sharing here, though I thought it would be helpful to list more details on the ingredients (and how I prepped some of them), so you could see my interpretation. For instance, her recipe mentions 2 potatoes, weighing 600 grams. I’d been eyeing some local Yukon golds recently, and felt like they would be perfect in this soup, more for their color, than flavor. I find them a rather boring tasting potato on their own, but they soak up the flavors of the other ingredients, and the chunks dot the soup like bursts of sunshine.

With just water, I think this soup would be a fine, benefitting from a blizzard of pecorino to boost the flavor. Using stock is a real gamer changer, adding more depth to the overall soup. Oddly enough a few people commented on the Guardian website that this seemed like a meager amount for four people. I’d strongly disagree. Not only should we be more conscious of portion sizes, but it is quite a filling bowlful (no surprise since it’s a combination of pasta AND potatoes). Some call this a first course, but it’s totally a main for my appetite (also, I might confess that it’s hard to stop at just one bowl).

One last note, and it’s an important one. We all know soup is one of those meals that is often better when heated the next day, right? Well, if that’s your plan, or you won’t consume all the soup once it’s ready, then don’t add the pasta to the pot, or else you’re in for a very different experience. Instead, ladle the amount you want into a separate small pot, add the appropriate amount of pasta, and finish as directed. Experienced soup makers, and chefs, might want to even cook the pasta separately and add it to the soup when ready to serve—I don’t suggest doing this, really. The soup benefits greatly from cooking the pasta in it. The broken spaghetti bits, which are what I used, thicken the soup, and absorb the liquid as it cooks (that means flavorful pasta!).

2 bay leaves (Rachel also suggests rosemary, but bay leaves are what I had at home)

Heat the olive oil in a heavy-bottomed pot or deep pan over medium-low heat. Add the onion, carrot and celery. Season with the salt. Cook, stirring occasionally, until soft and translucent. Add the bay leaf and the potatoes. Continue cooking, stirring to coat the potatoes with the oil, for 2 to 3 more minutes.

Add the stock, and more salt, if necessary (remember you’re adding cheese at the end, too, which will add more salt, so less might be just right at this point). Bring to boil, then reduce flame just enough so the soup is at a vigorous simmer, with bubbles popping to the top. Simmer for 15 minutes, until the potato is very soft—easily smashed with a fork. Add the pasta, and cook for another 10 minutes, or until the pasta is cooked to your liking. Add more stock if the soup seems to be thickening too much (or water, if used all of the stock in the beginning). Adjust salt, keeping in mind the cheese factor, again. Ladle into deep bowl. Finish with a swirl of olive oil, few grinds of black pepper, and as much cheese as you like before serving.