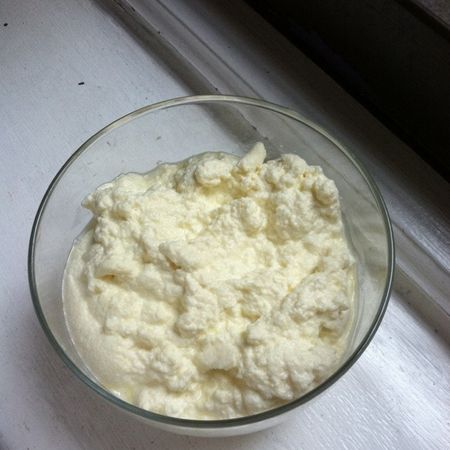 The last week has been a blur, and I suspect the next two will escape from me as quickly too. Isabella’s last day of school is Tuesday. Starting at noon that day, my mommy and work worlds will collide, the dust not settling until Isabella starts camp on July 12th. So goes the life of the work from home mom.

While I have a moment to breathe, I wanted to share a new tip for making homemade ricotta. I’ve been meaning to try it for weeks now, but just didn’t have the chance. I make ricotta weekly, but had been shy to take the risk of ruining a whole pot. I finally found the time, and nerve, on a somewhat quiet Sunday morning.

A little backstory is in order. I’m addicted to shopping at farmers’ markets. As far as addictions go, this is one I highly recommend and don’t think your friends and family will feel an intervention is order, unless you’re not good about sharing your bounty.

My obsession means that once I try something I love, I get hooked and have been known to travel distances for my favorite ingredients. Such became the case with buttermilk six months ago. It was right around then that I first tasted Hawthorne Valley Farm’s buttermilk. I’d previously reconciled to buying buttermilk from the supermarket because my local farmers’ market didn’t carry it. Then someone innocently told me about HVF’s, so I made the trip on a Wednesday morning.

There was no looking back.

I even started cheating on the Grand Army Plaza (GAP) market during the winter months to shop at Union Square on Saturdays—Hawthorne Valley Farm is only there on Wednesdays and Saturdays. As spring took shape, and the season became robust again, I longed for my GAP family of farmers. Then my schedule got so crazy the last three weeks, and visits to Union Square on Wednesdays became impossible.

My ricotta making went on hiatus!

Yes, I heard the thud as you fell out of your seats.

Me, the queen of ricotta, stopped making ricotta because I couldn’t buy one of the three ingredients I needed.

It was insanity, I tell you, on many levels. Sure I could’ve bought a container of buttermilk from the supermarket. In fact, I had to breakdown for recipe testing purposes, but that fresh, tangy buttermilk from HVF ruined me. I’d always used local cream and milk in the past since finding them had never been an issue. Now that I knew there was the potential for local buttermilk too, I found myself incapable of measuring out the supermarket stuff to make ricotta.

If you’re thinking I could’ve just used lemon juice, then you’re correct. The problem is I don’t like using lemon juice to make ricotta. If asked, I would never recommend it either. After much experimentation, I’ve found lemon juice produces a slightly tougher curd. Not inedible, and certainly fine in a pinch, they’re just not the creamy, pillowy curds I’ve come to love.

So for weeks, I’ve been wondering if I could use pourable yogurt in place of the buttermilk. It seemed an acceptable substitution from a chemistry perspective—swapping in an acid for an acid essentially. I do it all the time for baking recipes.

The final push came from Travis—you know him if you go to the Milk Thistle stand on Saturdays at GAP or sundays in Carroll Gardens. I bought some cream this week, and he kindly gave me a bottle of Milk Thistle’s pourable yogurt to try. He asked me to let him know what I thought.

I can now scream from the rooftops, letting the whole world know that if you have access to good-quality pourable plain yogurt, then you can still make my ricotta recipe. It’s an even swap of yogurt for the amount of buttermilk. So yes, I love that freakin’ pourable yogurt.

Does it taste the same, you’re wondering, right?

There’s a subtle, and I mean very subtle tang. You need to have a super palate to really notice.

Does it cook differently, you ask?

The biggest difference is the curds are smaller and the yield about 10 to 15% less. Unlike making ricotta with buttermilk, where larger curds pop to the surface as the milk solids separate, the curds from ricotta made with yogurt are tinier. We’re talking a difference the size of a pinhead, literally, but since you asked, I thought I’d report back in explicit detail.

All in all, my test had a happy ending, at least until I find another obsession.

And don’t get worried. I’m not disappearing until July 12th. I’ll be back in a day or two with my recipe for strawberry rhubarb crumble with an oat, hazelnut and lemon thyme topping. You really don’t want to miss this recipe, especially if you’re in charge of dessert at any BBQs this weekend. 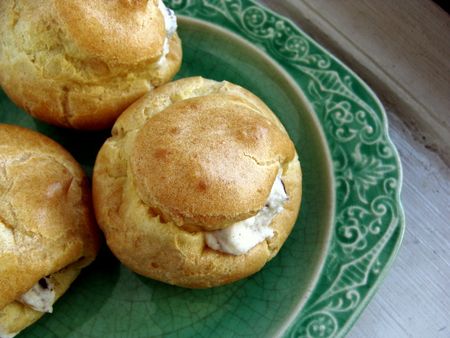 In case you need one more push to make homemade ricotta, I’ll be sharing this recipe for cannoli cream puffs soon. You’ll need ricotta to make the filling, and the homemade stuff really makes this dessert shine.

Add the ingredients to a 4-quart pot. Bring to a very gentle boil over medium heat. Meanwhile, line a sieve or fine mesh strainer with a few layers of cheesecloth and place it over a deep bowl or pot.

Once the curds begin to separate from the whey (you’ll see little specks of white bob to the surface), stir gently and set heat to the lowest setting (see NOTE). Cook for 2 more minutes, then remove pot from heat and set on an unlit back burner for at least 30 minutes, and up to one hour. (this will help the curds further develop).

Gently ladle the curds into the cheesecloth-lined strainer (this helps produce a fluffier, creamier curd, than pouring it into the strainer). When all the curds have been spooned into the bowl, pull the cheesecloth up the sides to loosely cover the ricotta in the strainer. Let sit for 10 minutes to drain (this will yield a very moist ricotta. If using for a cake recipe, you may want to let it drain longer for a drier consistency).