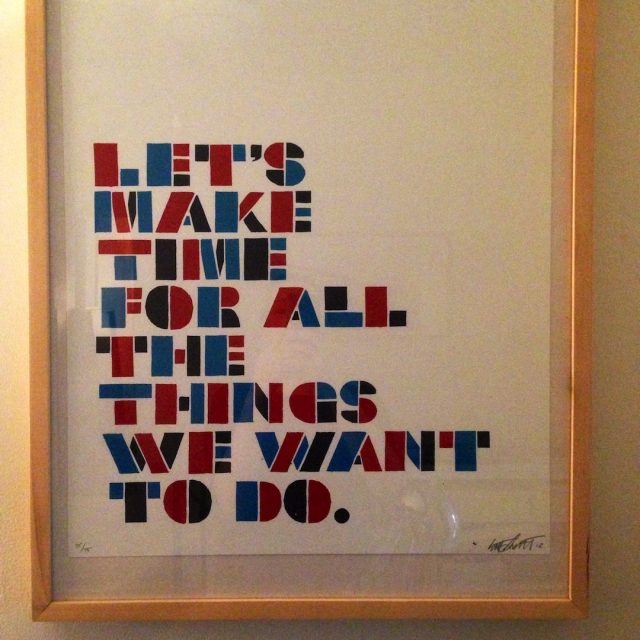 Twenty four hours ago I was walking out of Webster Hall. It was my first time ever going to a gig alone. I don’t think I’d even seen a live concert until I met Michael. He was my muse and mentor, all at once. Some of it is undoubtedly chalked up to the 14 year age difference. Though I suppose at 21, the age I was when we met, there was no excuse I hadn’t seen a live show, except for the fact that music just didn’t have the relevance in my life as it holds today.

I remember the day George Harrison died. I heard the DJ mention it on the radio as I was driving home from running errands. M was sullen, and mournful, when I walked in the door. He was in a funk, and there was no shaking it. I very unthoughtfully told him to snap out of it after a few hours…it wasn’t like he knew Harrison. Why the need to put a damper on our day? It would be years later, and losing part of my own past, to understand what that connection meant to him. The Sunday I woke up to hear that Lou Reed had died, I felt empty and numb inside. I lost something I couldn’t get back the day Reed left this great earth. I lost a piece of my love all over again. He saw Reed many times, but me, I only saw him twice, and both with M. We heard him recite the Raven someplace in the city…I should know that, shouldn’t I (note to self: go look in M’s box of old ticket stubs). We also went to see him perform Berlin at St. Ann’s when it was in Brooklyn Heights, not Dumbo (is it even there anymore?).

I got lost in Lou and Patti Smith when M died. I got lost in all the music he loved when he died. It was my life raft, my arm stretched out, fingertips grasping to him in the distance. Lou’s passing was a reminder that you can’t hold on forever. The tangibles eventually become intangible.

Today I caught up with a dear friend, someone who has believed in me since the beginning, in a way only Mikey ever did. I told her that last night, going to see Patti by myself, it taught me something. For the last few years, and probably long before that, I thought I had no claim to his music. It was his, and I simply liked it by default. In preparation for our move six months ago, I made the decision to sell part of M’s record collection (or is it albums? I never remember the difference between a record and an album). It took three passes before I had a “sell” pile.

The first pass was purely sentimental.

The second run through resulted in a slightly larger “sell” pile, having discarded some stuff I knew I had no interest in (if only I’d known that damn Leonard Nimoy album was worth more money!!!).

The third pass was a ruthless stripping away at the layers. It was no longer about my allegiance to him. The stakes were higher. What did I like (not the Sex Pistols!!!)? What did I think was essential for the girls to have as part of their father’s musical history?

Finally, the pile was whittled down to half, a mere 200 albums. The day the guy from St. Mark’s came, I felt somewhat dirty as he handed me a wad of cash. It felt tinted with betrayal. But the truth is that he had threatened many times to digitize it all, and get rid of the vinyl, to which I always protested “over my dead body”. Guess he won that argument…

Anyway, last night I realized that while I came into my own musically under his tutelage, the ownership of taste is all mine now. So much of our relationship, the first nine years in fact, were quibbles usually about me demanding to be heard and loved for who I was at my core. I may not have been as well-read, and I liked 80s music because I was a kid of that generation. I pushed back at every step of the way in our relationship, screaming (often literally) to just be loved for the person deep down. Back then I viewed books and music as window dressing. And in a way that’s what they represent. They’re the goods that pique your interest. I get that today, and only time and experience can teach that lesson. At 21 we think we know the rules. At 41, I realize we’re just making them up as we go along.

As 2014 winds down, I say goodbye to my sweet love. It is not the first, and I know it will not be the last. This goodbye is a thank you in a way, for the gift he gave to the soundtrack of my life. And these songs are for his journey.

I love you Mikey. See you on the other side. One day.