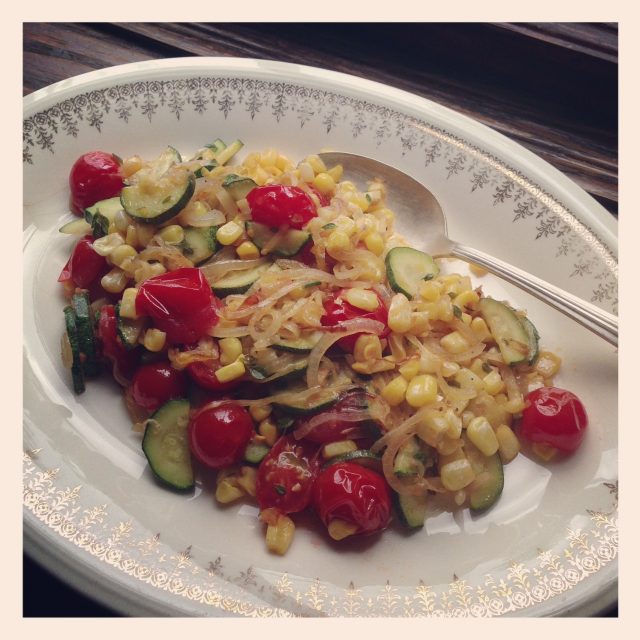 I feel like a stranger in my own life, and wonder if I’ll ever fit in again. The more I walk the streets of New York City, a reality is settling in. I’ve said this to friends, but somehow saying it here is going to make it feel real. Saying it here means I really have to face this fact, and figure out my next step…

My story feels finished here in Brooklyn, in New York City, in fact. The thing is I can’t really go anywhere until next summer. Isabella has one more year left in elementary school, and for all she’s been through, she deserves to close that chapter with her friends. They’ve come so far, and to move before then would be robbing her of precious moments and memories.

This feeling of unrest in NYC is nothing new. Years ago, back when she started kindergarten, Mikey and I talked about a five year plan. Even then we were tired and battered by this city. People travel from near and far to catch a glimpse of the excitement, the energy, but for two city kids, the hustle and bustle was beginning to wear us down. Just writing about this has thrust my heart into my throat. I feel a little nauseous thinking about leaving my friends, my family, my home…

One of the reasons I love going to Paris is that I feel so anonymous there. I can be anything I want, anyone I want. I hunkered down there for a whole month last summer because I needed to prove that I could drop myself some place completely new and unknown, and learn to swim instead of sink.

I’m not sure where life is going to take us Perillo Girls. And, honestly, I don’t wish for a crystal ball to see the future. The journey is what life is all about, and if we knew what the future held, perhaps we’d be too scared to follow the path for which we were meant. I think about this a lot in regards to Mikey. I’m not a gambling woman, and if someone had told me 18 years ago that I’d meet a great love, finally feel safe and secure, build a family and life together, and then suddenly have it disappear…well, I probably would’ve asked to see what was behind door number two.

So, this is the path I’m on, walking somewhat blindly, trying to figure out each move one step at a time. Sometimes the steps seems to magically appear, painting themselves, pulling me in a direction to which I don’t know, but am not afraid to explore.

As you can see, these are such heavy thoughts for a Monday. To take my mind off things a bit I made this salad for lunch. My other option was to sit down and sort through six months of receipts for my assistant. Going into the kitchen to cook seemed like a much more exciting alternative. I poked around the kitchen, looking for something to inspire me. I opened the fridge, which is incidentally exploding with leftovers, but it wasn’t a physical hunger I needed to feed. I needed to work out these feelings of gliding through life without any direction. I needed to create something to remind myself I could do this—I’ve always been doing this.

I had a few cherry tomatoes on the counter, and found a bag of corn in the freezer. They were in a ziptop bag, and the telltale strands of silk stuck to the frozen kernels were a clue I must’ve cut them from a fresh cob. I contemplated when I would’ve done this since corn isn’t in season, let out a sigh, and moved my attention back to the fridge. I had a thread going here, and was convinced I bought cilantro at the farmers’ market this past weekend.

Parsley, check, and check. Why did I buy two bunches? Oh, well.

Basil, yep, had that too.

There was a fat bunch of lemon thyme also, which I used to make this pesto.

But no cilantro. Hmph.

I settled on the lemon thyme for my salad, then went about prepping the rest of the ingredients. I love, love, love making salads, and always gravitate to them when I dine out. In my opinion, being able to put together an excellent salad is the sign of a great chef—not that I’m saying I’m one, but a girl can still aspire, right? So, what elevates a salad to greatness? For me, it’s all about texture and diversity of flavors, and also how those tastes play together to create a harmonious marriage with each bite.

A fancy restaurant might’ve put their best brunoise forward for this salad—chef speak for an 1/8-inch dice. Maybe they would’ve settled on a larger dice, say 1/4-inch. That would certainly work here, but I wanted a more rustic feeling. I decided to thinly slice the onions, and cut my zucchini into thin half moons—I forgot to mention I found zucchini in the fridge too.

Since the corn was frozen, I had two choices—boil it quickly, or just throw everything in the pan to make a warm salad. The latter option won out because I figured a quick saute in the pan would coax some extra sweetness from the cherry tomatoes too. A splash of sherry vinegar added just enough acid to pull all the other flavors together. I know some of you will ask “can I use another vinegar”? My best guess would be balsamic could work here, but next time you’re shopping, I really do encourage you to buy a bottle of sherry vinegar. It has a more nuanced flavor, less bracing, than apple, red wine or even balsamic vinegar.

Less than thirty minutes later, my anxiety had waned a bit. I spooned the salad onto a platter my auntie gave me recently. It belonged to my nana. I stared at the crack in it for a few minutes, realizing time is the glue that will fill the cracks I feel in my heart. Time is the salve that will one day make me feel whole again. I just need to stay more in the moment, and stop being so anxious wondering what’s next. It’s only a matter of time before I find my place in this world again. 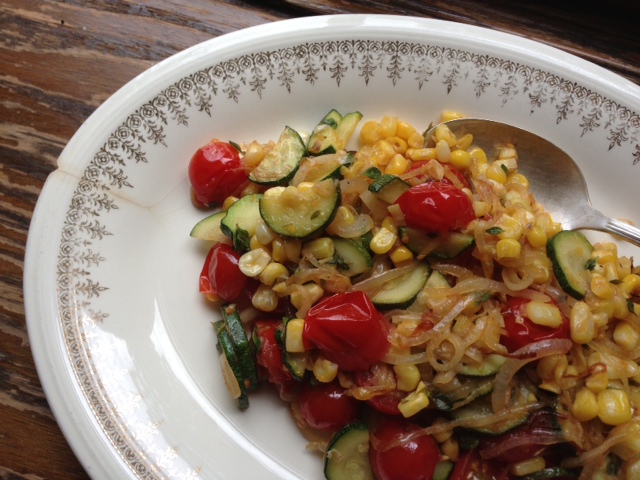 10 cherry tomatoes, cut in half

Heat the olive oil in a 9-inch skillet over a medium-low flame. Add the onion and saute until lightly golden and fragrant, 1 to 2 minutes. Add the zucchini and cook until it’s lightly browned, stirring a few times so the onions don’t burn, about 3 minutes.

You can make the salad up to one day in advance, and store it covered in the fridge. It can then be served cold, or at room temperature.