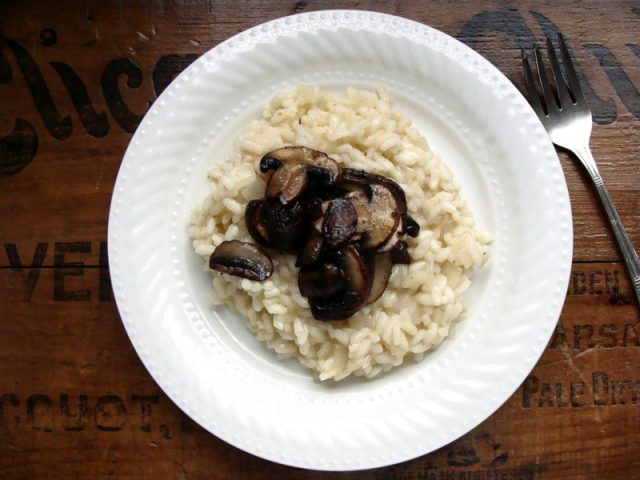 I’m not a fan of reality television.  In fact, I’ve never seen an episode of American Idol. The only real housewives of New York I know are my friends and neighbors. And as for dancing with the stars, well I’d rather be dancing under them with my head nestled on the Mr.’s shoulder.

Then there’s Jaime Oliver’s Food Revoution. Really, I should say was, because this past Friday was the last episode. I’ve been running through the words of this post in my head ever since it ended. I want to be filled with hope that real change can happen. But watching Jaime’s return to Central City Elementary and knowing that all of his and the lunch personnel’s hard work could be overturned with a scribble of some ink over an order form, resulting in processed food Fridays, just killed me.

My parents were hippies. They believed in protest, so let’s just say it’s in my DNA. I’ve marched on City Hall to repeal a ban on homemade goods at bake sales. I’ve served as co-president for the Wellness Committee at my daughter’s school. I’ve taught workshops to help parents with ideas for packing a better brown bag lunch.

And then I came in to see this sign smack on the front door of our school last week. 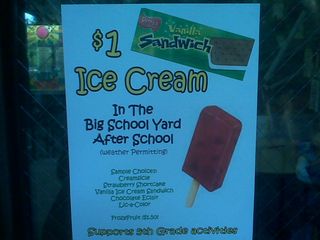 Yes, it was like a cold, hard slap in the face. Sorry 5th graders, but you won’t be getting my support for your trip to D.C. this year. I’d love to help, but your parents aren’t willing to negotiate.

I contacted our parent coordinator and asked how this is being allowed on school grounds. She told me to talk with the 5th grade PTA representative. I emailed her, twice. No response. Audrey Negron, if you’re out there and see this post, I’d love to talk.

I’d love to support the 5th grade activities but not on your terms. In case you haven’t noticed, we’re assaulted by Mr. Softee the second we leave the school yard and right around the corner lurks Dunkin’ Donuts and Baskin Robbins. Offer me some healthy options for a nutritious after school treat. Throw in a granola bar, or maybe even a basket of apples to sell.

A fellow parent said the situation had saddened her too, and she’d rather just give them $20 as a show of support. Sorry, but I’m not letting them off that easy. Frankly, that’s just enabling this reckless behavior sanctioned by the PTA. I wonder what would Jaime do? Winning over Rod surely was easier for him than making any inroads with my local PTA. United we stand and divided we fall—that’s how the saying goes, right?

Ok, so you must be wondering what any of this has to do with risotto? Well, nothing and everything. See, Jaime’s mission in Huntington was to get people back in the kitchen. He wanted to dispel the idea that cooking from scratch was time consuming.

Risotto is one of those dishes that people shy away from because they think it’s too complicated. Stories of endless stirring abound—even in some very well respected cookbooks. And you know what, I used to follow that technique too. Before I had kids there was plenty of time to stand over the stove and stir away.

After Isabella was born, I reserved it for special occasions. Then one day I decided to get brazen. I wondered what if I didn’t hover and stir constantly. Maybe I could just come back every 5 or 10 minutes, swirl it with the spoon and tend to making a salad or the toddler underfoot. And so, my dear friends, that is how I rediscovered risotto.

And you know what? I’m not alone in this theory. Remember Edda Servi Machlin and those light-as-air gnocchi. Well, being from Italy and all, she also knows a thing or two about risotto. Her recipes in Classic Italian Jewish Cooking all call for a similar method. Machlin also casts aside the traditional preparation of sauteeing your “add ins” and then cooking them with the rice. She prefers to cook them separately and then combine them at the end for a more intense flavor of each ingredient.

The lady knows what she is talking about. After more than 10 years of making risotto, I’m changing my ways.

Before you get started, there’s the rice to consider. There are 3 main types of Italian short grain: arborio, carnaroli and vialone. Many purists discredit arborio immediately because it breaks down quickly and if not watched carefully, it will get mushy rather than retain its shape. Carnaroli is a bit more forgiving and yields a delicate, creamy risotto. Vialone is a more resilient rice that holds its shape, yielding distinct grains, even when cooked to a perfect al dente doneness—it’s the favorite of restaurant chefs. 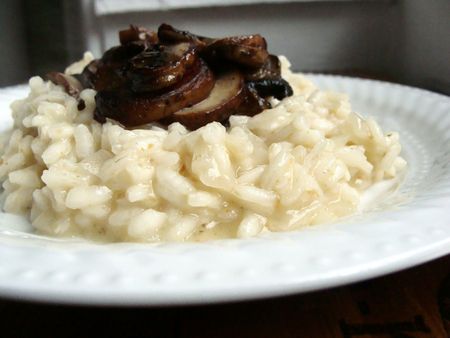 So, based on my descriptions of these three, can you guess which one I used in the picture above? Nope, not that one.

I usually stock all three types in my pantry—I’m obsessive, I know.

Except on this particular day, I was fresh out of the carnaroli and vialone. All I’m going to say is, we women have a way of working wonders in our kitchen. I kept a careful eye, though still didn’t stir and stir. The almost 2-year old hanging off my leg would have none of that silly behavior. 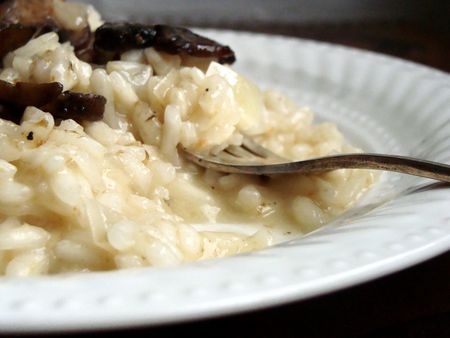 Real cooking can be fun. That’s what Jaime and I believe. So, what are you waiting for?

Join us in the revolution.

Melt 2 tablespoons of butter and the olive oil in a large skillet over medium heat. Add onion and sauté until just golden, about two minutes. Add rice, stirring well. Slowly stir in wine; bring to a boil and cook until wine reduces by half. Season with salt and pepper.

Add  1 1/2 cups of stock and let simmer until almost absorbed, about 8 to 10 minutes. As the rice absorbs the liquid, add remaining stock one cup at a time, again stirring frequently, until risotto is creamy and rice is al dente.

Meanwhile, melt 1 tablespoon of butter in a small skillet over medium heat. Add the mushrooms and season with salt and pepper. Saute until they’ve released all their water and become a deep golden color. Cover and seat aside to keep warm.

To finish the risotto, stir in remaining butter and grated cheese. Evenly spoon some of the sauteed mushrooms on top and serve immediately.

p.s. While risotto is best served immediately, my daughter has been known to take some in her thermos for lunch the next day.

p.s.s. They’re looking for volunteers over at Jaime’s Kitchen, now known as Huntington’s Kitchen, in case you live in the area or know anyone who does.