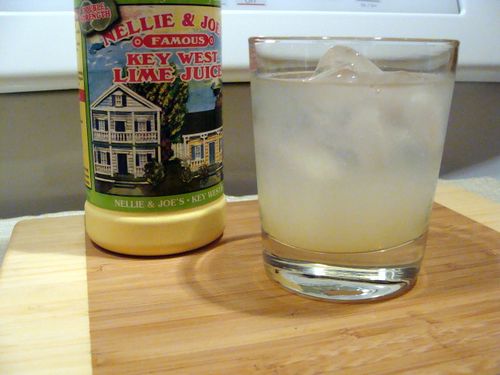 I don't keep soda in the house, and every now and again, the urge for a sweet burst of carbonation hits me. This usually happens while the baby is napping or at midnight—both times when running out to the market aren't an option. About two months ago, such a craving arose and I approached it as I would any cooking challenge and decided to see I could do with the ingredients I had on hand.

A quick survery showed some seltzer, and tucked away in the back of the fridge was a bottle of Nellie & Joe's Famous Key West Lime Juice. I also had some simple syrup in there. A few minutes later, an icy cold rocks glass was filled with a spash of this and spritz of that, and I was sipping a citrusy drink with a hint of coconut flavor. Add it to this weekend's festivities and kick it up with a shot of bourbon or tequila for a head start on the fireworks.

makes as many as you want

This is really a no-recipe drink. It's mostly seltzer with a splash of key lime juice and simple syrup—the amount depend on your tastebuds. If you're serving it at a party, I suggest making a large batch and refrigerating it a few hours before so you can just pour and serve as needed.