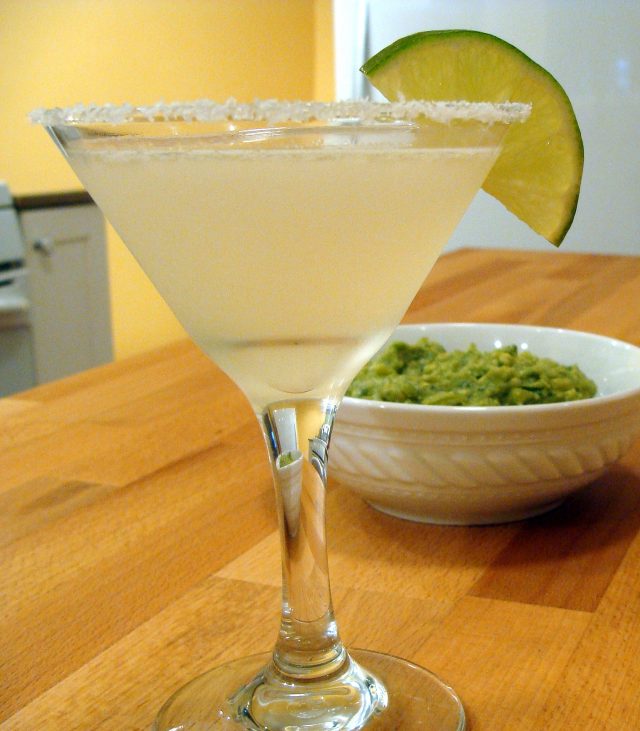 Here's a sneak peek at the next Cuisinart Stand Mixer blog post. For my standmixer-less friends, don't fret. It's a great machine but don't let the lack of equipment stop you from indulging. You can use a food processor or regular blender to puree the watermelon. And you can easily get away with a fork to hand squeeze the limes (it'll qualify as upper body toning too). 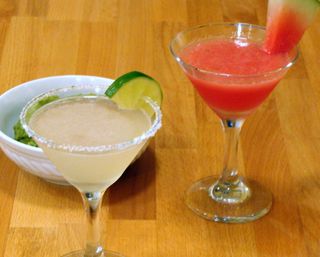 Firing up the grill is just one part of getting ready for grilling season. You’ll need something on hand to quench your guests’ thirst. While I prefer wine with my main course, there’s nothing like a cocktail to get any shindig going. Margaritas are always a crowd pleaser. Make a pitcher, then sit back and ‘shake to order’.

Making simple syrup is the first step. It’s easy to make and yields much tastier results than any mix available off the shelf. Simple syrup is called just that because it’s equal parts sugar and water simmered until the sugar dissolves. I often do this in the microwave using a heatproof glass measuring cup. Make a large batch, then store it a sealed container in the fridge for up to two months.

The citrus juicer attachment on the Cuisinart Stand Mixer makes squeezing limes a breeze. You can go crazy and juice a bunch of limes, then pour whatever’s left into ice cube trays. Once frozen, unmold them and toss in a sealed Ziploc bag. Easy entertaining is all in the prep. A little extra work when you have a few free minutes means you’ll be able to make margaritas, lime marinades and salad dressings at a moment’s notice in the future.

Once you’ve got your simple syrup and fresh squeezed limejuice, you’ve got the ingredients to make your own sour mix. Traditional recipes, like the one in Nick Mautone’s Raising the Bar, call for adding egg whites. I decided to leave them out of this one, to alleviate any worries regarding consuming raw eggs.

The watermelon margarita recipe below was inspired by one I had at a recent event. That one was made with basil. Since I served mine with tacos, I thought cilantro would be a better compliment. Some recipes call for muddling the fruit and herbs. I found pureeing a bunch of watermelon using the blender attachment on the Cuisinart Stand Mixer a big timesaver. It also meant the kids could slurp up watermelon juice while the adults enjoyed their own spiked version. The force of the cilantro hitting the ice in the pitcher also infused the essence into the margaritas.

Feel free to double, triple, even quadruple for large crowds. Mix all the ingredients, except for the cilantro, and leave in a covered pitcher in the refrigerator. When ready, pour into an ice-filled cocktail shaker, add the cilantro, then shake and serve.

Makes two 3-ounce drinks
On the rocks, straight up, salt, no salt. All good questions to ask. Straight up is served without ice and in a martini glass. On the rocks, means over ice and can be served in a wine glass or old fashioned glass. To make it salt rimmed, simply rub a lime wedge around the top of glass and dip it into a dish of coarse salt.

Add sour mix, triple sec and tequila to cocktail shaker. Shake vigorously until outside of container beads up with sweat. Serve straight up or on the rocks, as you like. Garnish each drink with one lime wedge. 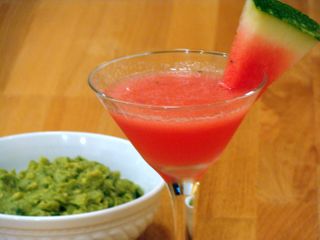 Makes two 3-ounce drinks
These fruity cocktails make for easy drinking. I’ve cut back the alcohol a bit so you can enjoy a few without regret the ‘morning after’.

Add watermelon juice, sour mix, triple sec, tequila and cilantro to cocktail shaker. Shake vigorously until outside of container beads ups with sweat. Serve straight up or on the rocks, as you like. Garnish each drink with one watermelon wedge.

Makes 1 ½ cups
This is a refreshing base to add to sparkling water for a refreshing non-alcoholic drink. Traditional recipes call for egg whites but you’ll find this one tastes just as good without them.

Combine ingredients and shake well. Store in refrigerator until ready to use for up to one week.