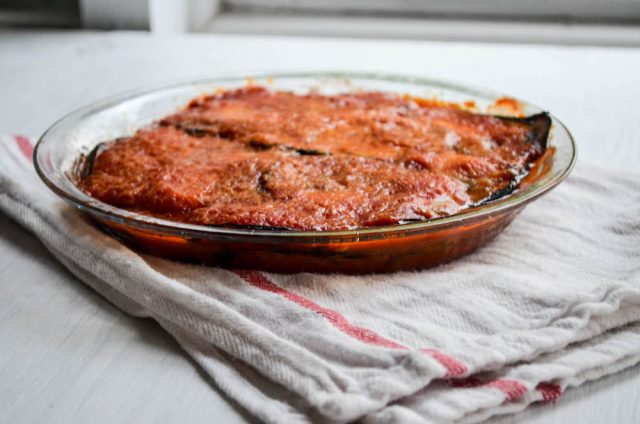 When I think of eggplant parmigiana, I’m reminded of Michael’s father, Dominick. It was the dish he ordered every time we went to Louie’s Seafood on East Tremont Avenue in the Bronx. His parents lived in Co-op City, the tip of the Bronx, bordering Westchester. Our routine used to be picking them up, and driving over to Louie’s since there was no place good to eat, unless we were there during lunch time, and in that case, there was a diner that was quite reliable.

Louie’s made great pizza, but it was the eggplant parmigiana Dom always ordered. Claire, my mother-in-law would get the chicken or veal francese. We’d ask for a table in the side room, a little quieter, and less distracting. Michael’s parents were deaf, and so they signed to each other, while reading our lips since I didn’t know sign language. When they replied it was often very loud, a bit unintelligible, but mostly alarming to people who’ve never been immersed in deaf culture or community.

Michael’s request for the side room wasn’t because he was embarrassed by his parents. Being a hearing child of deaf parents isn’t easy. You grow up being their ambassador of sorts, and grow up faster than you ought to. His mother was also a very demanding person, adding another layer of an already complicated mother-only child relationship, which always seems more amplified when the only child is a son.

He grew up with people staring as they rode the bus in the mid to late 60s. Rude remarks from kids at school. It was no wonder when we went to Louie’s that he asked for a table in the side room. Going out with his mother was already stressful for a number of reasons. He was just trying to carve out some sense of peace to eat his meal, and get out of there as emotionally unscathed as possible. 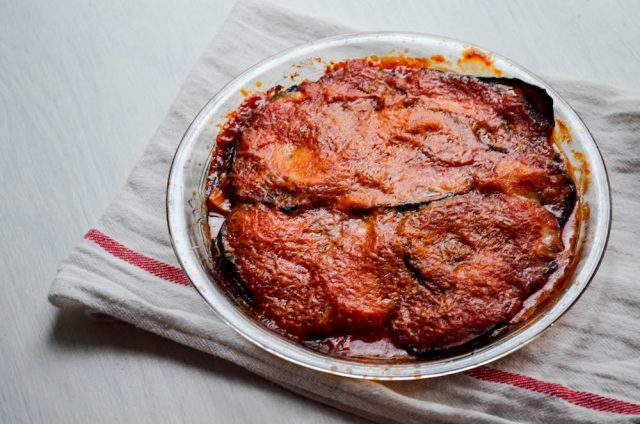 I read recently that Louie’s closed a few of months ago. There comes a point in your life when you begin to outlive the things you love—favorite restaurants, parents, husbands. Thankfully, they live on in the memories we carry and share, in the children we kiss good morning and good night every day. And in the foods we eat and cook.

Last week as I began assembling this eggplant parmigiana I thought about Dom. He was a simple man who grew up with tough circumstances, losing his hearing to scarlet fever when he was two years old, and his mother dying soon after. He had the sweetest smile, and when he said my name it always sounded like Jeffrey.

He loved to talk, and before he got older, and tired, he’d stand in the kitchen of my Brooklyn apartment while I was cooking dinner for all us, sharing clippings from the newspaper, and telling me stories of visiting friends at the deaf club, and what new drama happened while setting up chairs for services at temple (like me, he was an Italian-Catholic who became invested in his spouse’s Jewish heritage).

Over the years I learned to speak slowly so he could read my lips, and soon understanding what he was saying wasn’t difficult at all. Dom passed away just shy of a year after Michael, six years ago this month. I’d had a big falling out with my mother-in-law six months after Michael died, and didn’t find out until a year later. She didn’t want anyone to tell me. No chance to attend the funeral. No chance to say goodbye.

But when someone touches your life in such a way, goodbye is really just see you later. 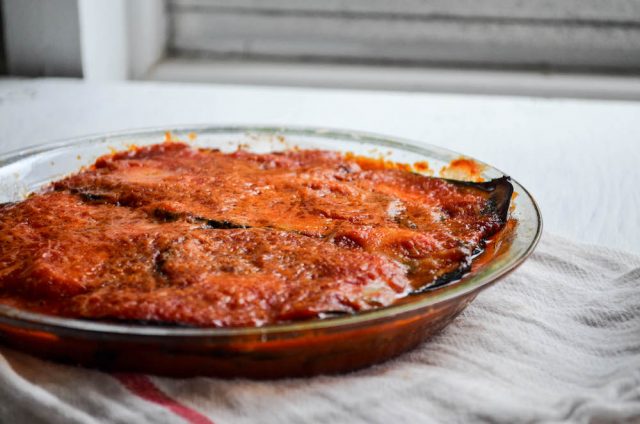 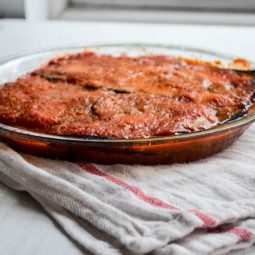 This is one of those no recipe recipes. Forgive me if you prefer more structure, but I trust once you read the recipe, you'll also trust your instinct on make this. To make the grilled eggplant slices, brush both sides of the slices with olive oil, and grill until softened and cooked through but still slightly firm. You can also use a cast iron skillet on the stovetop to do this.
5 from 1 vote
Print Recipe Pin Recipe
Prep Time 30 mins
Cook Time 25 mins
Total Time 55 mins
Servings 3 to 4