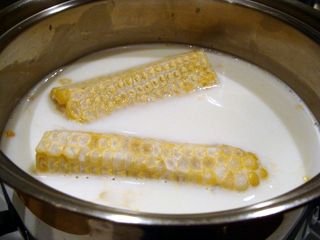 Folks, no, I haven't lost my mind and resorted to feeding the Mr. and kiddos a pot of corn cobs and milk. That picture there represents a recipe test I've got on the back burner, so to speak. The Mr. took me to Gramercy Tavern for our wedding anniversary a couple of weeks ago, and as usual we had a wonderful meal. I first met the pastry chef, Nancy Olson, about 5 years ago while working at a restaurant called Django (pretty sure it's now closed).

Now it's necessary to take a few steps back in this story. My very first restaurant job was at Gramercy Tavern, as a reservationist. I chose it because I was head over heals for Claudia Fleming (one day I'll also tell you about the silverware "ping" story…please remind me, as I often forget things). Claudia was all about letting an ingredient's natural flavor shine. Flash forward years later, and I met Nancy. After one bite, I told her she reminded me of Claudia Fleming. Soon after Claudia left Gramercy Tavern, and I put Nancy in touch with the chef de cuisine (fancy restaurant talk for second in command in the kitchen). It didn't work out the first go-round, for reasons I really don't remember (I told you I forget), but maybe a year or so later, Nancy was hired as the pastry chef. Nancy works wonders in the kitchen. She first introduced me to quark cheesecake (a must try), and now she's even garnered the attention of Ms. Martha Stewart. Someone who works for her show kept talking about this delicious blueberry corn sundae, so she called one night (well, I imagine her assistant called), came in and booked Nancy on her show a few days later.

So back to that picture above. I ordered that very sundae (I'd had it before) on my last visit, and man oh man, you owe it to yourself to try it. Anyway, I had some ears of corn from the farmer's market and got inspired to make my own "corn milk", thinking I'd make some sort of pudding or cake with it. That's as far as I've gotten, with all this craziness of cookbook testing. But if you're feeling inspired now too, watch Nancy on Martha's show and then take a look at her recipe to make it yourself. And, by the way, those corn muffins she garnishes the sundae with— the best I've ever tasted. They're on my to-do list too!

I'll be back in a day or two with the recipe for that sweet potato, leek and ricotta souffle I've been tweeting about, so "see" ya soon.