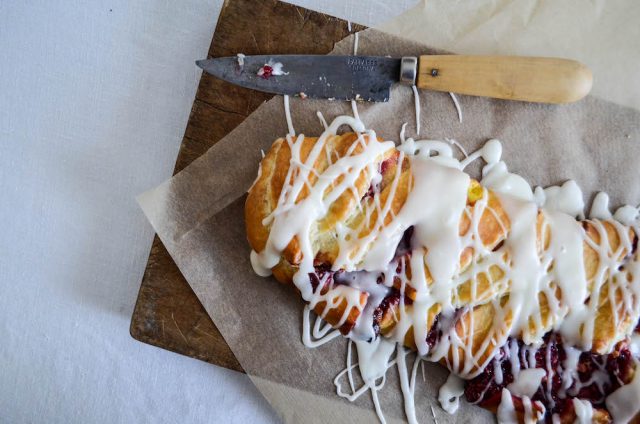 Remember when snow days felt like something special? A day off from school, a pretend “sick” day from work so you could build a snowman. Now in the time where days seem to have no meaning or distinction from one another, a snow day probably feels like one more inconvenience. There’s one thing that could make this snow day a little better: a cheese danish.

It feels a million years ago, but back in 2017 I worked on Patricia Heaton’s cookbook. People always ask what recipes are my favorite, and while it’s never an easy question to answer, there are certainly some I love deeply—any kind of cheese danish falls into that category.

Growing up in Brooklyn, danishes were a part of breakfast life. Cheese danishes were always my weakness, and I usually stuck to just cheese, no fruit. With the right homemade filling, or a good quality store-bought jam, though, fruit cheese danish is a serious contender.

What kind of fruit should you use in a cheese danish?

That’s totally up to you! I’m sharing the apple cheese danish recipe I developed for Patty’s cookbook but you can use any fruit you want for that layer (the photo at the beginning of this post is a raspberry version). I’ve skipped the apples and used my homemade raspberry jam. I bet apricot jam would be amazing.

On the store-bought jam note, Bonne Maman is a reliable go-to when I’m doing development for a project. Their jams contain all the same real ingredients I use when making my own homemade jams (this isn’t a sponsored post, but I’d be more than happy to work with Bonne Maman if they’re reading this!). 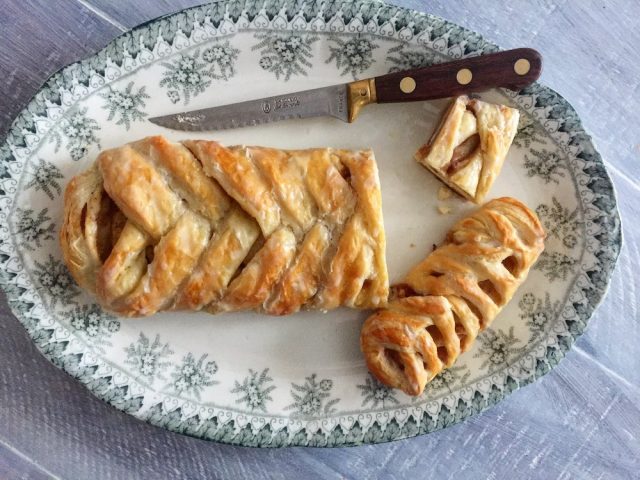 This cheese danish uses puff pastry instead of a yeasted dough.

The cheese danishes I grew up eating were yeast-based doughs. That’s what you’ll find as the base for a lot of danish recipes (like this couronne recipe). I’ve patience for some things but when it comes to cheese danish I want them in under an hour, and that’s just not a reality with yeasted doughs. My solution is to use puff pastry for a cheese danish that can be made pretty quickly for a morning treat instead of a weekend baking project.

Do you need to make your own puff pastry to make this raspberry cheese danish?

I’ll fill you in a secret. I love making rough puff pastry (click here for my recipe) but sometimes I just want to fulfill a craving without having to recreate the wheel. You know what I mean? In those moments, store-bought puff pastry gets the job done, and I keep a package of good-quality puff pastry (read: no junky ingredients) in my fridge at all times for when I need an easy shortcut. The old Jennie of a decade ago would’ve turned her nose up to this idea. Life and time teach you a lot, and a shortcut, store-bought item isn’t going to kill anyone. Moderation, right? 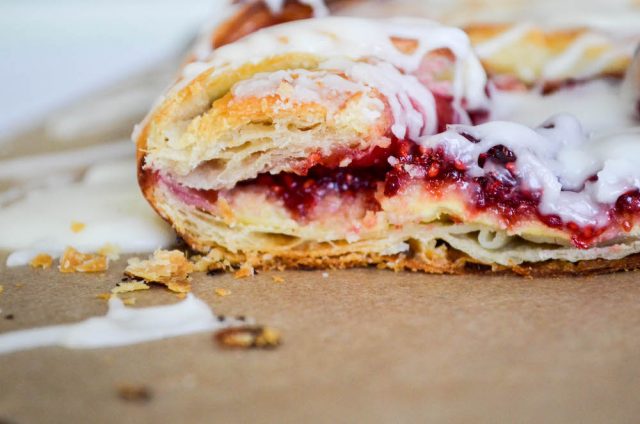 How do I fold cheese danish in a criss cross pattern?

Getting the fold right takes practice. Don’t be hard on yourself if the first few cheese danish you make come out scraggly-looking. It happens to the best of us (myself included!). I’m including photos from the cookbook that show the process. 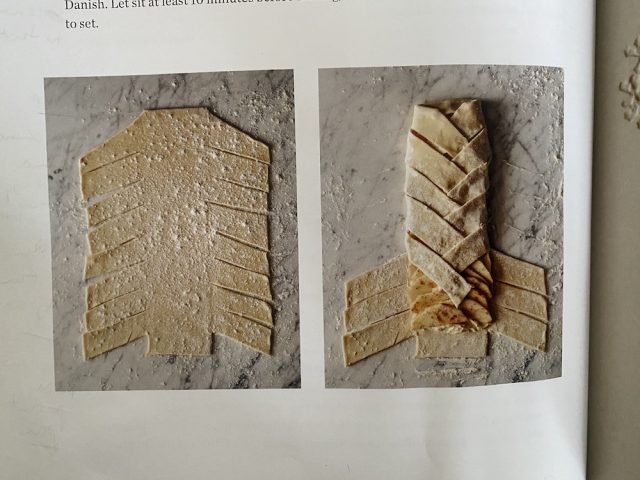 How to fold a cheese danish | In Jennie’s Kitchen

Can I freeze cheese danish?

This recipe yields two full-size cheese danish. You can bake one right away, and freeze the second one without baking it if you want. Set the danish on a waxed paper lined pan in the freezer until firm. Then wrap the Danish tightly in plastic film. Bake it straight from the freezer, no need to thaw, for 35 minutes (10 minutes more than the freshly made one). In this case you’ll only need a half batch of icing for each danish.

You can also freeze the baked cheese danish, using the same method as above. Just don’t ice it. Let the danish thaw overnight in the fridge. When ready to enjoy, warm it in a 350ºF oven and ice before serving. 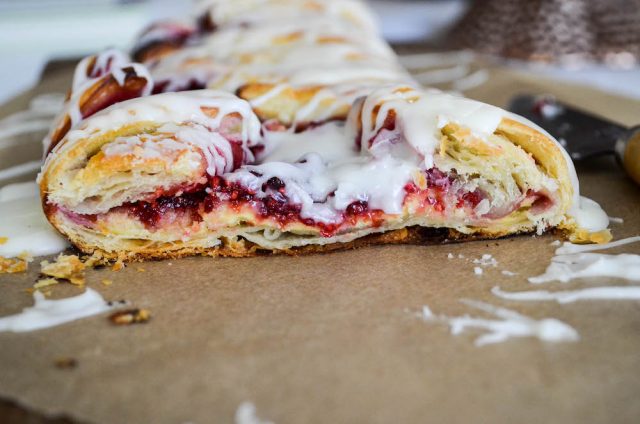 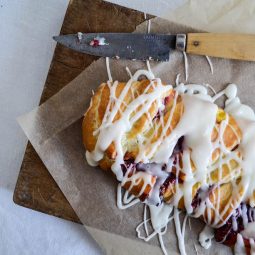 If making this with jam (use 1/2 cup for each danish), then omit the apples, sugar, spices and lemon zest, skip step 2, and instead spread the jam over cheese filling in lieu of the apple filling.
5 from 1 vote
Print Recipe Pin Recipe
Prep Time 20 mins
Cook Time 25 mins
Total Time 45 mins
Servings 16