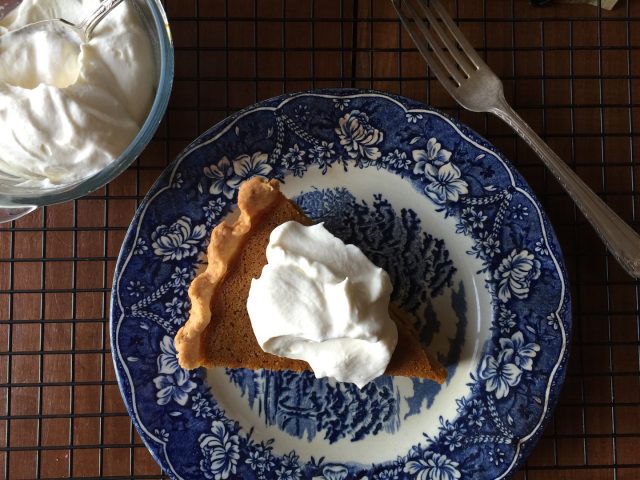 Last week my house was heavy with the scent of warm pumpkin pie. I know, I know. Who makes pumpkin pie a week before Thanksgiving? Me, that’s who. When my pie craving hit, I scoured the cupboards, convinced I had evaporated milk, but alas, there was none. I was going out to the store to get eggs and butter, and could’ve picked some up, but decided a pumpkin pie recipe sans the canned stuff might be more useful to all of you (spoiler alert: it was the best pumpkin pie, ever). We’ve all been there, at some point, a craving that seemingly can’t be fulfilled because of one missing ingredient, right? One day I might try making my own evaporated milk…(I can see Mikey doing an eye roll from above). For now, I decided to give it a try with heavy cream. I scaled back the amount of liquid, since my research told me it would be way too much cream if I just subbed in an equal amount for the missing evaporated milk. 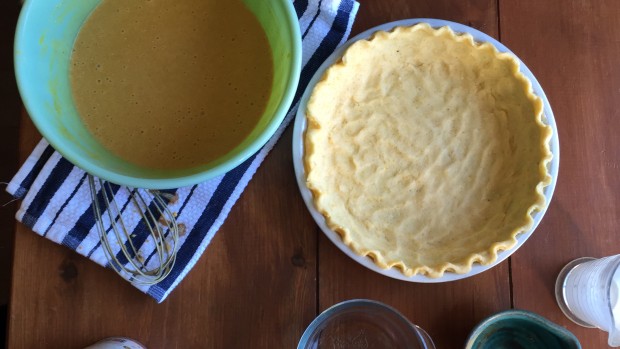 The resulting pie filling was incredibly light. More a mousse-like texture than the standard pumpkin custard filling you might be used to. In my next round of testing, I decided to add an extra egg to achieve a more custard-like filling. Bingo! I also used granulated maple sugar, instead of cane sugar, to give you all a refined sugar free-option. The sweetness level is perfect for my palate, but if you prefer super sweet desserts, you might want to use more (and if you do indeed want to use cane sugar, then that amount would be 3/4 cup / 150 grams). 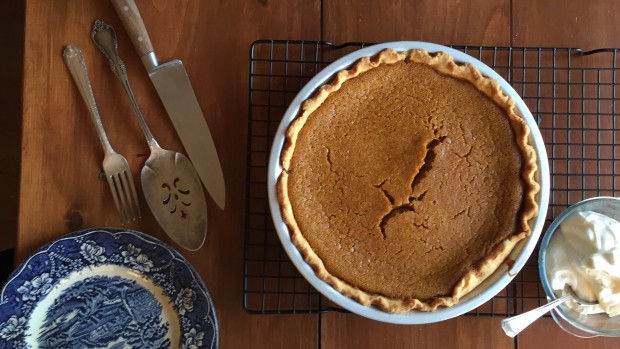 A mishap while transferring the pie to the oven made part of my crust flop over (see the photo in the middle). Am I the only one who does that with the thumb of the potholder?).  And yes, the pie cracks a bit in the center (okay, maybe more than a bit on this one). It happened with all of my tests, and never did with the evaporated milk version. No worries; it still tastes amazing, and I feel much better knowing the ingredients are more simple (have you ever read the ingredients on a can of evaporated milk?). 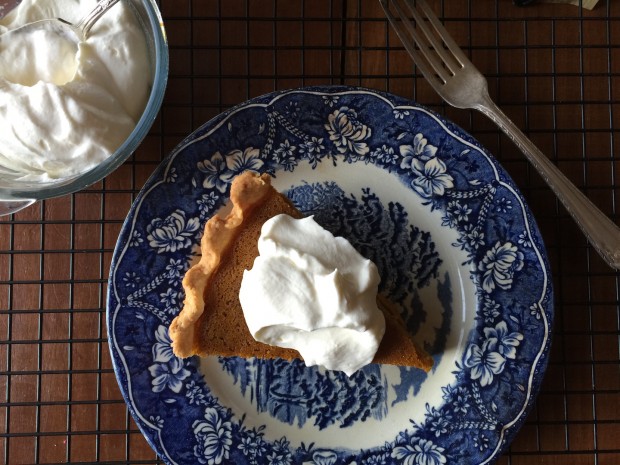 There’s also a video to go with your helping of pie. I’ve been on a tear with shooting them lately, and love it. They really show the ease of it all. So, tell me. What would you like to see in the future?

p.s. here’s the link to my Foolproof Pie Crust and No-Roll Pie Crust video. Both are must haves as we dig deep into Thanksgiving preparations.