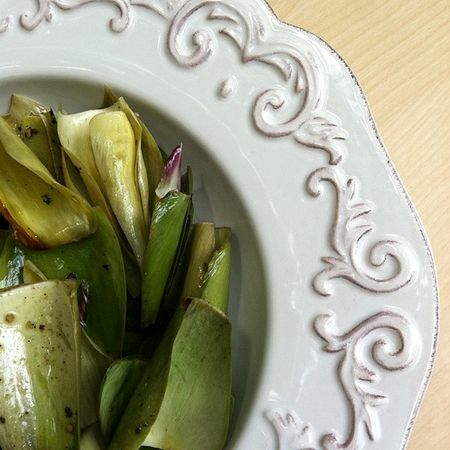 Last week Olga wrote about artichokes and falling in love with cooking them. Like so many before her, she'd been intimidated.  It's easy to understand why, with their gnarly look, tough exterior and those darn pointy thorns atop each leaf. They truly are nature's example of survival of the fittest.

Well, in the words of Maya Angelou, life doesn't scare me—and neither do artichokes. I was lucky enough to grow up with them at our Thanksgiving table every year. They were prepared with a homemade breadcrumb filling, then braised until the roots of the leaves were tender and succulent, the sauce requiring a crusty loaf of bread to sop it all up. Still, artichokes were reserved for holidays. I mean who has time to sit and linger over an item that yields such a small return? I'd rush through the leaves, then slowly let my teeth sink into each morsel of the heart, trying to savor the buttery flavor.

I was walking home yesterday and impulse bought a few. Surely I'm not the first to buy artichokes on a whim. Cleaning them can be daunting at first, but after you've done it once or twice, you get faster and the time actually passes rather quickly. Olga also recommends watching this video by Melissa Clark for a quick tutorial that demystifies cleaning artichokes. It really does show the simplicity and ease of prepping them.

I did chuckle at one of part though, when Melissa says the leaves aren't worth saving if you've stripped your artichokes to just cook the hearts. I was confronted with the same frugal thought as I cleaned my chokes yesterday, and wondered why would I throw these leaves away if I'd grown up my whole life eating them? It seemed silly and wasteful, so I took care while prepping my artichokes.

I spent a few extra minutes trimming the tips with a pair of kitchen shears to remove the pointy thorns as if I was going to steam them whole. Then I carefully plucked each leaf off and placed them in a bowl. My yield was a mountain of leaves when I was done. The hearts went into a pan of olive oil, salt and pepper to braise—an ingredient to be eaten up later in the week.

Since I was planning to grill a bunch of veggies for the week—fava beans and spring onions were in the works too, I decided to make foil packets to steam the leaves. I added a drizzle of olive oil, a few pats of butter—okay maybe I went a little Paula Deen with the butter, and a sprinkle of sea salt and freshly ground black pepper. The reward was a bounty of tender leaves that make a perfect summer appetizer—if company is coming make sure they're close friends. You know the kind who won't mind you slurping the meat from the leaves, then licking your salty, butter and olive oil-slicked fingers. Definitely worth the time and effort in my opinion.

Continue to get the recipe for grill-roasted artichoke leaves.

Blast from the Past:  June 2010 roasted chicken salad.