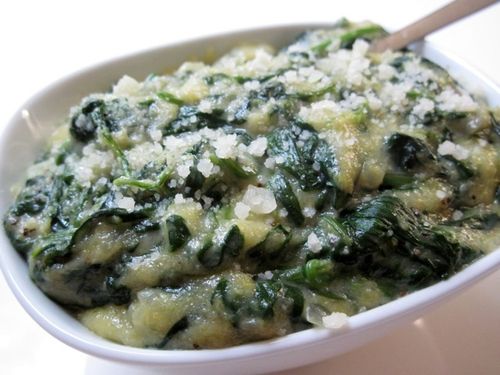 Meet my food soul mate Stacie from ChowMama.com. After reading her guest post, it was clear that we are two gals who think as one. And if you're looking for steak in the Carroll Garden's section of Brooklyn, visit Dan from Grazin' Angus Acres at the Greenmarket in front of P.S. 58, and tell him Jennifer said hi.

By Stacie Billis of ChowMama.com

The dog days of summer are upon us and I have been feeding my family light, refreshing eats to help them beat the heat. Chilled wedges of melon; crispy, cooling salads; juicy, fresh fruit; sweet homemade popsicles. But all the while, I’ve had a hankering for steak. Not the summery kind, like a quick-grilled skirt steak with corn relish. But, rather, a steak house steak. The heavy, fatty kind you get in dark, wood paneled rooms that are perfectly cozy on a cold winter night.

I’ve been ignoring my hunger for a steak house meal for a while now, but I’m also 8 months pregnant. There’s no escaping a craving. I’d finally decided to satisfy my desire on a date night at New York institution Peter Luger. (Yes, New Yorkers—I’ve been around the steakhouse block and maintain that Peter Lugers is, deservedly, my favorite. Discuss amongst yourselves.) But a series of fortunate events changed my plan.

Here’s what led to a homemade steak house meal that I was able to share with our ChowBaby. Yes, without fear of clogging his tiny little arteries. I hope it, along with my recipe for a healthier “creamed” spinach, will inspire you, too!

I fell in love

I have a thing for butcher shops. The funky odor, sawdust covered floors, even the bloody aprons (especially charming when worn by old, cranky men). But I’ve fallen hard for a butcher shop without the typical ambiance I find so enchanting.

Japan Premium Beef is an immaculate butcher shop with an incredibly well informed and sharply dressed (white button downs and skinny black ties) Japanese staff. The bright, modern space specializes in Washugyu beef, a cross of Wagyu and Black Angus, raised in Oregon. Overseen by breeder Tad Yano, Washugyu cows are bred from the most revered cow bloodlines in Japan (bloodline is thought to be the key to excellent marbling) and are raised on a strict Japanese feeding program without, of course, antibiotics or other growth hormones.

Japan Premium Beef originally planned on exporting their gorgeous meats to Japan, but international shipping restrictions required a change of plans. Now that the beef has to stay in the States, we get access to their premium (but relatively inexpensive) meat. And, the other day, I finally found time to make my way to the Noho spot.

After checking out the T-bone, NY strip, skirt steak, and flat iron, I decided on something new: a flap steak. The polite gentleman behind the counter revealed that it was his current choice and I was sold. He explained that the cut was from the stomach and growing in popularity. (A quick Google search led me to this tidbit on the bistro favorite.)  And the best part? He gave me a 1 ½” cube of pure beef fat in which we were to cook our steaks, instead of butter and olive oil.

I was inspired by butcher Tom Mylan. No matter how good a casual cook you are, attempting to make a steak house style steak in a home kitchen is (or should be) intimidating. Perfect steak is the result of a very delicate balance between the right cooking equipment, access to great meat, and well-practiced technique. But a little guidance from a professional can make all the difference.

With my Washugyu flap steaks in hand, I pulled out my cast iron pan and pulled up this interview with Brooklyn’s star butcher, Tom Mylan, where he explains how to achieve a crusty, charred outside while maintaining a juicy, tender inside. His technique worked flawlessly. I have no notes, no adaptations. Just a strong recommendation that you follow his directions by the letter. And then raise a glass in his honor.

My conscience was eased… just a little bit
In 2007, the UN released a report called “Livestock’s Long Shadow” in which their Food and Agriculture Organization claimed that as much as 18% of global human-induced greenhouse gas emissions can be traced to meat production. Oye. Not good news for this eco minded meat enthusiast. (I lived without meat for eight years and, honestly, can’t go back.)

I’m committed to buying antibiotic and hormone-free meat, ideally from small producers. The expense means that we go meat-less pretty frequently, but I figure that’s all the better for both our health and the environment. But is it enough? While I can’t be sure, this article by one of our country’s most influential small-scale farmers sheds some light.

I’m loath to suggest that Coleman’s point of view is definitive, but it is an informed, alternative opinion on a complicated issue. And, if nothing else, if you have no intention of giving up meat, it provides thoughtful insight on how and why you should shop for meat. While my Washugyu flap steak wasn’t produced locally, I feel it’s a reasonably responsible treat.

So there you have it. The confluence of events that inspired me to trade in a dinner at Peter Luger for an attempt at cooking my own steakhouse meal: flap steak fried in a cast iron pan with nothing but beef fat, thick cut tomatoes and onions sprinkled with sea salt and good olive oil, and my healthier take on the steak house staple creamed spinach. It was perfect!

So, go buy some beef, follow Tom’s instructions, and make this ridiculously yummy side dish. It has all of the richness of the classic version (thanks to a decent amount of butter), but gets it’s velvety creaminess from polenta instead of heavy cream (which is normally used in addition butter and sometimes even bacon fat). It makes a great meal for toddlers on its own or can be served with tomato salad (sans meat) to older kids who aren’t yet into steak.

With my steak craving sated, I’ve moved on. Probably until winter when I’ll surely make it back to Luger. And now, during these last, hottest days of summer, I’m back to wanting ice cream, frozen grapes, and quick pickled cucumber salad.

Melt 1 tablespoon butter in a medium skillet over medium heat. Sauté shallots until they begin turning golden brown. Add spinach in two batches—when the first has wilted completely, add the second, along with ¼ teaspoon salt. When all of the spinach has wilted, you'll find that it has released some liquid. Turn heat to high and allow liquid to cook off, about 7-10 minutes. Periodically press spinach against bottom of the pan to release excess liquid, allowing it to cook off. Set spinach aside.

Put broth on medium-low flame to heat through. In the meantime, whisk together polenta and flour. Set aside

Heat 3 tablespoon butter in a medium saucepan over medium heat. Add flour/polenta mix, whisking with melted butter for about 1 minute. Add 1/3 of the hot broth and whisk until smooth. Repeat 2 more times. Once all of the broth is mixed in smooth, cook polenta for 1-2 minutes, whisking the entire time. Add milk, a little at a time, continuing to whisk. Once the milk is incorporated, cook polenta another 1-2 minutes.