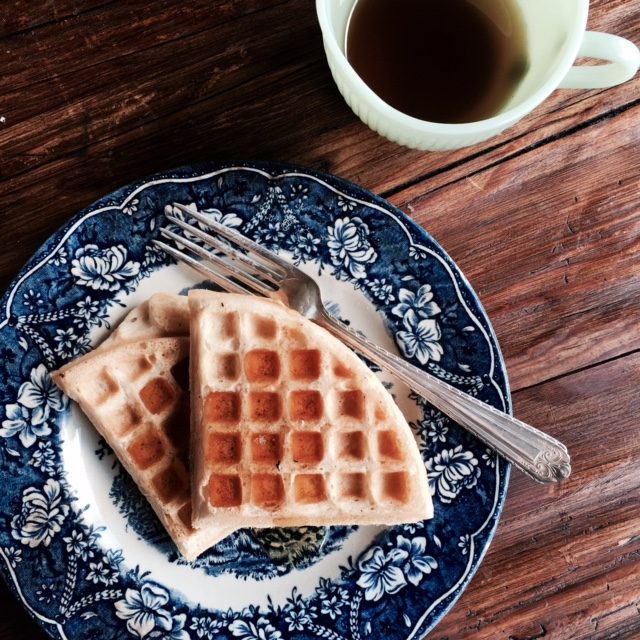 Once upon a time there was a guy who loved waffles.

And he had a daughter who loved pancakes.

Every Sunday, they’d argue over what would be on the menu for brunch, until Mommy intervened, declaring we’d alternate between the two every week.

You probably guessed who the little girl and the guy were in this true story. Funny how times change, and tastes shift. I often wonder if Isabella’s fondness for waffles now is a way for her to connect with her papa. When M passed away I began drinking my coffee like him, black. It made me feel closer to him, and like I was keeping him alive in some small way. I might be overthinking the waffle thing, but who knows…

I make waffles often now. After all these years, my Sunday Best Waffles are still the most popular recipe on this blog (it’s been pinned more than 21,000 times!). I like to think it’s converted many people from using boxed mixes to making them from scratch. All of my dairy-free cooking has me thinking about my old recipes through a new lens. So, when I made them recently I decided to give them a bit of a makeover. They’re not vegan, but if any of you want to offer up a substitute for the eggs, please do share it in the comments. I’ve yet to experiment with chia “eggs”, or any other vegan egg replacer, for that matter.

Isabella loved this version. It’s the first time I didn’t fess up to what I did differently, though if the kids had asked outright, I would’ve been honest. Replacing the butter was a no-brainer, using grapeseed oil instead, and used safflower oil spray to coat the waffle iron. I switched to cashew milk months ago, for myself, in preparation for this current recipe development project. I’m not a fan of almond milk straight up, unless I make it from scratch, but the So Delicious brand of cashew milk has a good flavor. That’s what I used here; you can swap in any dairy-free milk of your choice. Another bonus: it’s a one-bowl recipe, so minimal dish washing which is always cause for celebration in my mind.

The waffles cooked up nice and crisp in my waffle iron. Crispier, in fact, than my buttery version. They don’t get quite as golden without the aid of butter, but I’ll take crispy over golden any day when it comes to waffles.

Makes 6 – 6-inch round waffles (not Belgian)

Add the flour, baking powder, coconut sugar, and salt to a medium bowl. Whisk to combine.

Add the eggs, milk, oil, and vanilla. Whisk until just blended (be careful not to over work the batter). Let the batter sit for 5 minutes to “develop” (just a fancy word for letting the baking powder activate).

Pour, or ladle, enough batter to cover about 2/3 of the surface (the rest will spread once you close the top)—a 1/2 cup measure works perfectly in my All Clad waffle iron. Cook until steam is no longer drifting from the sides of the waffle iron, or according to the setting you like best on your waffle iron.