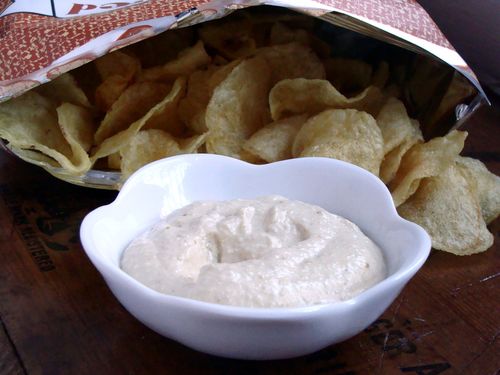 I've been making small changes to the big picture in terms of eating these days. If there's one thing motherhood has taught me, it's patience. While I'm not perfect in that department, watching the way my girls have hit big milestones is proof that some things just have to happen at their own pace. I've come to accept that's the case for losing these last few baby pounds. I'm not a quit-cold turkey sort of gal. What I can do, though, is take baby steps. I've added more smoothies to my breakfast routine, as well as swapped bagels for a poached egg with fruit and whole grain toast—a good balance of protein and fiber. Come the weekend, I break out the bacon for Sunday brunch.

Snacking is the tough part. I love salty and sweet things, so while the Mr. watched the Jet game last weekend, it gave me an excuse to revisit an old friend: onion dip. While I've never bought a packet of onion soup, I'm not shy about digging in when I'm at someone else's house. True the ingredients itself aren't full of fat and calories, and I can certainly substitute fat-free sour cream, but in the end all I'd be left with is a chemical-laden snack.

I must confess I came across this recipe by accident. My original intention was to make a spinach and onion dip. When I got home, what I thought were frozen bags of spinach in the freezer turned out to be peas, and lots of them—the kids love their peas. Problem was I had already promised the Mr. some dip, and truth be told, I didn't want to let myself down too. I'd even bought the requisite Ruffles potato chips with the intention of doling myself out a few and then move on to dipping carrot sticks.

I had already decided to slice and caramelize the onions for the spinach dip, so when it became apparent there was no spinach on hand, I didn't waver. And while I didn't get the veggie boost I was hoping for to the condone a few extra potato chips, the end result was amazing. The ingredients were simple, but real, with no artificial aftertaste. My version is even studded with tender bits of onion (while proofing this, I actually added bacon to the text in my head. Oh, imagine how that would taste!).

And even though I agree with Jennifer Steinhauer that our kiddies are going through snack overload, I don't see any harm with indulging in a treat while watching the game with their daddy. My 21 month-old, bless her palate, wiped the rim of the bowl clean with her tiny fingers. There's almost nothing she doesn't like to eat—and I know it will soon end. All kids go through what I call the dark period.The good news is they eventually see the err of their ways, and when that happens, I'll have some of this yummy dip waiting for her. 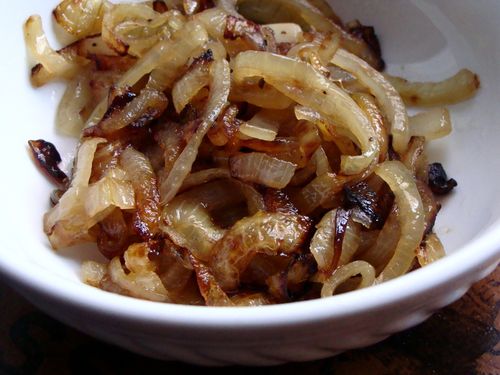 Heat olive oil in a skillet over medium-high heat. Add onions and season with salt and pepper. Saute until they begin to soften and become golden, about 10 minutes. Cover skillet and reduce heat to medium-low. Cook, covered, until onions are very tender, about 10 more minutes. Transfer onions, Stir, scraping up any browned bits at bottom of the pot, to a bowl and let cool for 10 minutes.

Add onions, sour cream and yogurt to the bowl of a food processor and pulse until well mixed and the onions are mostly, but not completely chopped. You can alternately chopped the onions very fine by hand and fold all the ingredients together with a rubber spatula. May be stored in an airtight container for up to two days. 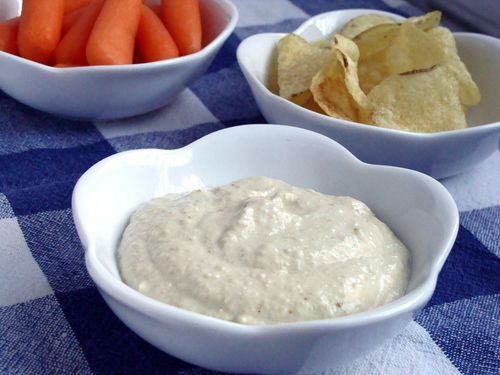